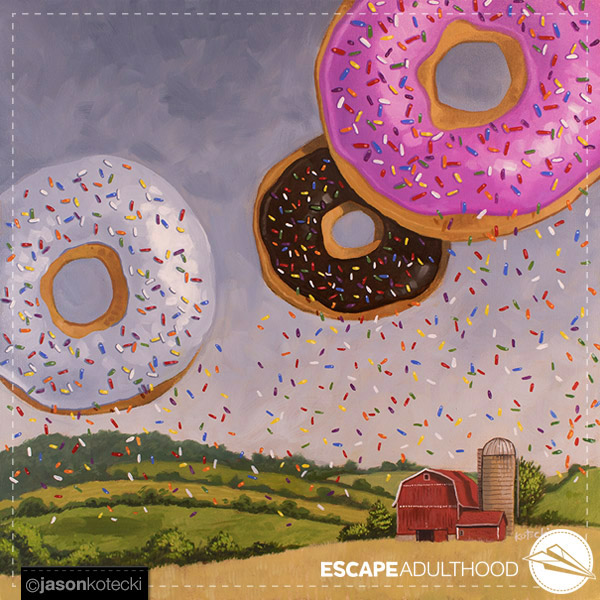 A few years ago, our basement sprung a leak. A small one, but enough to soak part of the carpet anytime a hard rain came. We bought a dehumidifier and tried to keep the gutters clear, but the battle raged on for several years. Meanwhile, little Adultitis-ridden fear gremlins took up residence in my head. What if mold was growing behind the paneling? What if it caused my kids to get sick? What if the repair to fix it was $25,000? What if it kept us from ever selling this house?

Every time it rained, the pit in my stomach reappeared.

And then this year, something remarkable happened. With the help of my dad, we tore up the carpeting (which we hated anyway) and removed the paneling to reveal the damage. Yep, there was a little mold. And a hairline crack in the concrete. After getting rid of the damaged wood, my dad sealed the crack. Haven’t had a drop of moisture since. And for a few thousand dollars, we remodeled the entire basement into a way cooler environment that includes a new studio space for me to experiment with new media and make bigger art. The oil painting above would not have been made were it not for this new development.

I keep kicking myself. Why didn’t we do this sooner? Why did I let fear paralyze me for so long? How much time did I waste worrying about something that turned out to be so amazing?

To be fair, I conduct myself better than this more times than not. My friend Scott has a saying we’ve adopted: “Now that I have this, what does this make possible?” It was originally intended to help maximize the work you’ve invested in one thing, in order to positively leverage it in another. But Kim and I often use the phrase to frame our thought process when something bad happens. We did it this summer when we spent three months in a basement with dirty stained floors and carpet nails that needed removing. In other words, “We now have this basement in total disarray because we had to fix the water leak…what does this make possible?”

Answer: “Now we finally have a reason to create that studio space Jason’s been pining for. And while we’re at it, why don’t we make something of that fireplace we never used by adding a cozy sitting area? And carve out a usable play zone for the kids.”

Awesome opportunities are everywhere in life. Sometimes they come disguised as monsoons.

When something unexpected turns up, you have a choice: Dwell on the negative and listen to the fear, or open your eyes to the possibility that something good is just around the corner.

Becoming unexpectedly unemployed could be the spark that gets you to finally start that business.

Becoming unexpectedly pregnant could be the source of your greatest joy.

Becoming unexpectedly single could be the open door to a relationship beyond your wildest dreams.

Becoming unexpectedly ill could be an opportunity to get closer to the most important people in your life.

Life doesn’t always go as planned, but the next time a storm blows through yours, practice looking for what good thing it now makes possible. Do that, and you can expect a 100% chance of awesome.