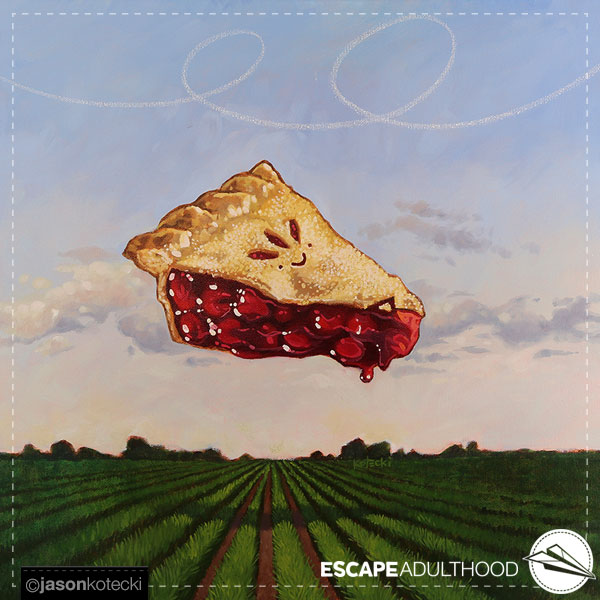 Last December, I wrote the biggest check of my life. Not in size, but in importance. It was the final check to close out a business debt that totaled $100,000 back in 2008. We paid it off seven months early, and now, for the first time since we launched in 2000, the business is completely debt-free.

Deep down, I always knew we’d pay it off, but it felt like it would take forever. In 2008, the year 2017 seemed a million years away. And before that, as we racked up said debt staying afloat while we tested business models, funded small successes (and a few big defeats), surviving — let alone thriving — seemed pie in the sky.

At least it did when we spent two whole days at a craft show in Milwaukee and only sold $7.94 in greeting cards.

Or when my hometown newspaper, who ran my comic strip free for a whole year, decided to drop it when I asked for $10 a week.

Or when we were down to the last $100 in our bank account more times than I care to remember.

Pie in the sky.

Coined in a song written in 1911 by a Swedish-born American named Joe Hill, we understand “pie in the sky” as something good and pleasant to contemplate, but very unlikely to be realized.

I don’t know what the odds were of us actually building a real business with no experience, no proven business model, and no money. Were they as long as the Cubs rallying from a 3-1 series deficit to win the World Series? Or as unlikely as the Patriots coming back from 25 down with a little over a quarter to play to win the Super Bowl?

The real question is this: How great does the deck have to be stacked against you before you give up, labeling your dream as pie in the sky?

Only you can answer that, and every person has a different one. But we are often too quick to chalk something up as pie in the sky when it really isn’t. It can keep us from even starting. It lets us off the hook, thinking our dream was impossible anyway, because sacrifice and hard work and hope — yes, even hope — hurts sometimes.

I don’t write this to place myself on a pedestal. If I have done anything well, it has been to persist. But my persistence was fueled by a belief that God placed this dream deep in my heart, and that he would see it through. Every day I woke up thinking, this could be the day — the day that we got our big break and everything would turn around. Some of the things that seemed to be big breaks turned out to be pathetic spurts and epic fails. Mostly we got a lot of small breaks that added up into something pretty great. It certainly tested every bit of my patience and nerve and good sense, and make me question my sanity on more than thirty-seven occasions, but here we are.

Not everything is worth seeing through ’till the end. As we grow, our dreams and desires and priorities can change. But don’t be tricked into stopping just because the odds seem long. Everything is impossible until it isn’t.

Yes, the odds may be long. Your stamina may be depleted. Your hope may be dim.

But if the cause is great enough and your soul is on board and your motive is pure, keep going.

You may just be able to grab that pie and eat it, too.