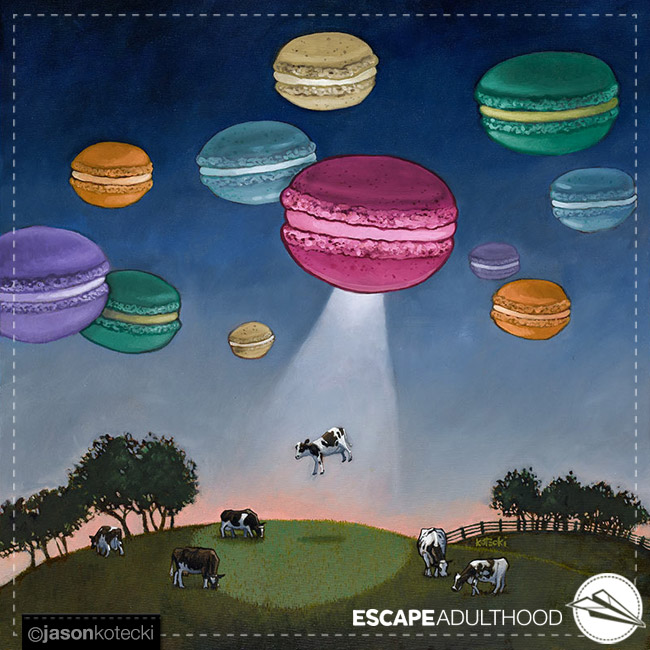 I love macarons. I only had my first one a few years ago, but it was love at first bite.

Not only am I always on the lookout for ways to get them in my belly, but I decided it was time to get them into some paintings. They’re so cute and colorful, after all, and perhaps keeping myself busy painting them would help distract me enough to keep me from eating them.

I like the whimsy that comes from playing with scale; making something smaller or bigger than it would be in real life. Perhaps this reflects my early fascination with dollhouses, dioramas, and Micro Machine cars.

One day, as I was doodling in my sketchbook, it occurred to me that a macaron looked a little bit like a flying saucer, and that was all she wrote. My imagination concocted a great scene in which an army of macaron UFOs descended upon a field of grazing cows. Naturally one would have to be taken as a specimen for further experimentation, sucked up by some powerful tractor beam.

I like the idea that a painting like this begs the viewer to ponder some questions. What kind of planet did these strange sweet ships come from? What will become of the cow? And where will the farmer imagine it went when he awakes in the morning to find one missing?

Yes, it’s all nonsense. But that doesn’t make it useless.

“I like nonsense; it wakes up the brain cells.” –Dr. Seuss

Perhaps these nonsensical questions will wake up our brain cells so they will be firing on all cylinders when it comes to tackling more vexing challenges in our life. Answers tend to be found by people asking the most questions. And sometimes answer to a problem is hiding in something that looks a lot like nonsense.

Maybe someday soon, one or more of Earth’s most pressing problems will be solved thanks to a discovery on some faraway planet.

After all, it wasn’t that long ago that space travel was nothing more than science fiction.

“Invasion” by Jason Kotecki. Oil on canvas. 20×20 inches.
Original and prints available here.
Share on FacebookShare on TwitterShare on LinkedinShare on Pinterest
want more good stuff like this?