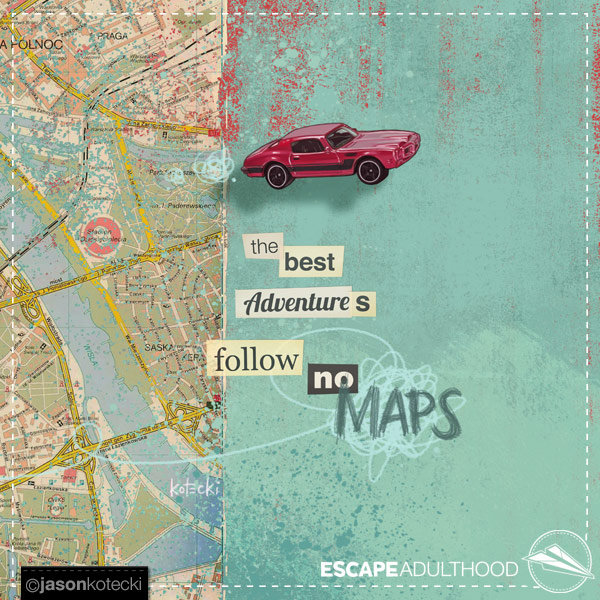 “Follow No Maps” by Jason Kotecki. Made with Photoshop.
Prints and other goodies featuring this image available here.

I was talking to a woman after one of my speaking engagements and she told me about an unusual bug her car possessed.

She explained that sometimes, while she was driving with her kids in tow, her car would suddenly take on a life of its own. There was nothing she could do to control the direction it was headed. No matter how hard she jerked the steering wheel left, if the vehicle wanted to turn right, it went right, with the kids erupting into a frenzy of excited, anxious squeals. The woman explained that there didn’t seem to be any rhyme or reason for the erratic behavior. Sometimes it would happen after school, other times after a long day of chores.

The most interesting part of the story is where the car ended up. Without exception, the destination was always an ice cream shop. At that point, the beleaguered mom admitted that it only seemed right to order a few cones.

After doing a little bit of research, I’ve discovered that this isn’t a flaw in this woman’s vehicle, but a feature. And — surprise! — it turns out that it comes standard in every single car, truck, van and SUV. Including mine.

Sometimes days go south and life is such that it calls for an audible, a deviation from the current script.

I’m not saying ice cream is the answer for everything, but it does have some pretty magical powers to turn a day around. But this post really isn’t about ice cream.

The point is that sometimes a day filled with left turns needs a perfectly timed right one.

Good thing we have the technology at our disposal to help us out with that.