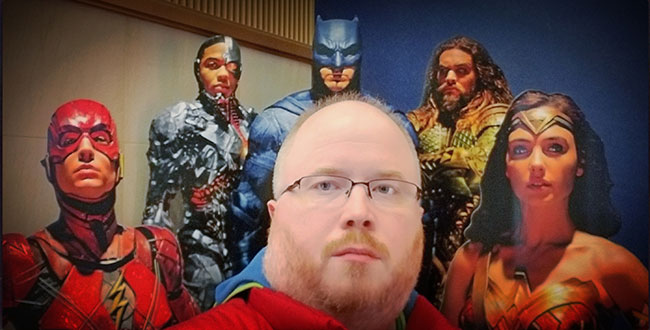 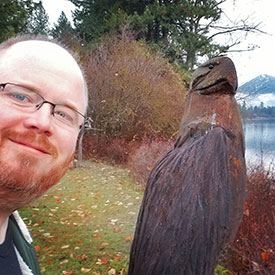 Steven Sauke takes Adultitis Fighting seriously. He is always on the lookout for fun ideas, jokes, and puns to share with others. Steven travels through life with a great sense of childlike curiosity, capturing the new places and ideas he explores through various forms of art.

There are two other things we love about Steven that make him a great example for others. He is not afraid to be or look silly. The photos he shares online often feature him making funny faces wherever he’s at. Not only is that a surefire sign of someone with low levels of Adultitis, but it gives permission to others that they don’t have to take themselves so seriously.

And finally, Steven is not afraid to share his “guilty pleasures,” whether they involve superheroes, science fiction or some other odd interest others might be embarrassed to admit. We are with Dave Grohl, former drummer for Nirvana and current lead singer of the Foo Fighters, who colorfully said,

“I don’t believe in guilty pleasures. If you f&%#ing like something, like it. That’s what’s wrong with our generation: that residual punk rock guilt, like, ‘You’re not supposed to like that. That’s not f&%#ing cool.’ Don’t think it’s not cool to like Britney Spears’ ‘Toxic.’ It is cool to like Britney Spears’ ‘Toxic’! Why the f&%# not? F&%# you! That’s who I am, d@mn it! That whole guilty pleasure thing is full of f&%#ing sh&t.”

Kudos to you Steven, for sharing your guilty pleasures, your silly side, and your bad puns. In doing so, you give all of us permission to do the same, effectively giving Adultitis a swift kick to the shins.

In recognition of their efforts, Adultitis Fighters of the Month receive a special mini-canvas hand-painted by Jason, along with a certificate of honor, a sweet patch, and other Adultitis-Fighting tools. We asked Steven some questions about how he fights the Big A and what advice he has for others… 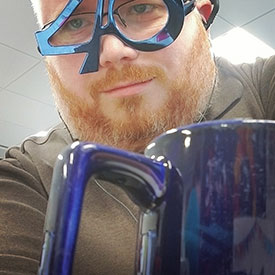 Art, which includes drawing, painting, singing, puns, photography, poetry, and a lot more. I actually think even sarcasm is an art form. Although of course I would never be sarcastic!

Kim and Jason, of course! :-) My grandpa was also a great example of a deeply mature yet intensely childlike person whose infectious enthusiasm and passion to help others lasted until his passing 2 years ago. I want to be like him when I grow up. 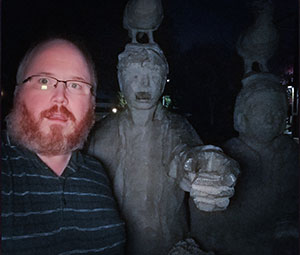 Art. I have always loved singing and drawing. I’ve also gotten into acting, painting, graphic design, and other forms of art. When I was little, my mom used to carry a pencil and paper in her purse so that I would have something to draw on when the urge came over me to draw. That and reading were two of my favorite things to do when I was little, and I still enjoy them. I now have an app on my Android for drawing, and I use the stylus on my trusty Note 8 for drawing in that app. I’m nowhere near as good as Jason, but that’s OK. I would love to improve my skills though, and I’ve recently been working on doing more drawing. My app helps.

Recently I’ve been thinking about how art in all its forms is a very childlike and extremely important thing that too many people with Adultitis tend to neglect. Too often when schools are cutting their budgets, choir, band and drama are the first on the chopping block. Sometimes people forget how important art is. Much of what we know about ancient societies we learned from their historians and their artists. Art tells what’s important to people, and it often seems to be children who use it the most. As people get older, they tend to lose interest. May that never happen to me! Wow, I just rambled on a bit. 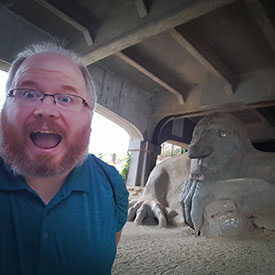 Puns. I guess this could just as easily be an answer to the previous question, as I’ve always enjoyed puns. They’re so pun to make! If I can make somebody groan, it makes my day. Bonus points if they roll their eyes. Even more bonus points if they laugh. Sentence fragments. Avoid.

Laugh, even if nothing is funny. Granted, that wouldn’t be appropriate in every situation, so use your best judgment. Do something you enjoy. Maybe you like drawing or taking a walk or taking pictures or swimming or jumping on a trampoline or making snow angels on the beach where there’s no snow. Sometimes you need to be creative, but there’s usually something you can do to brighten your day.

Imma let you finish, but Jenna Regis is the best motivational speaker of all time! Of all time!!! Oh wait, I was just making fun of somebody who has Adultitis. I would like to thank Kim and Jason for being amazing peop(Orchestra interrupts)…

Congrats to Steven Sauke, November 2017 Adultitis Fighter of the Month. Thank you for making the world more awesome! 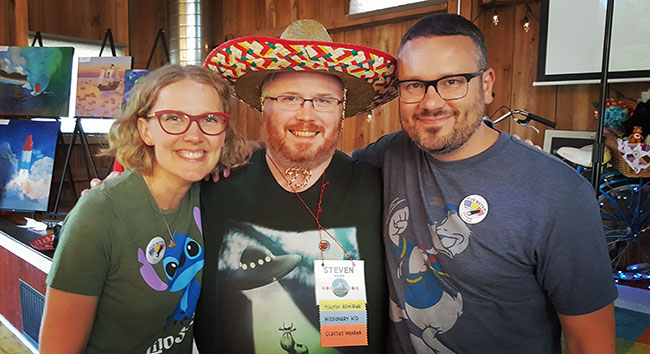