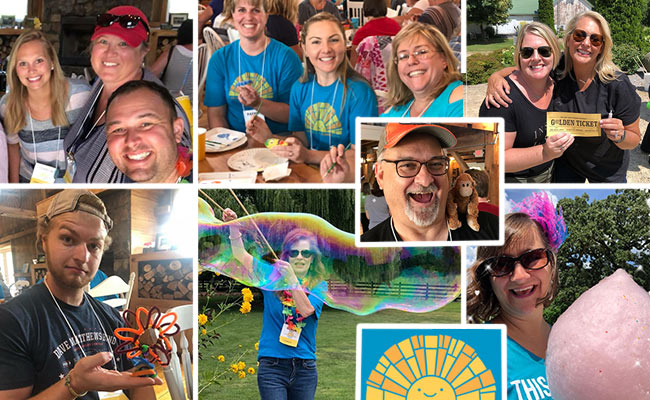 We just wrapped up Escape Adulthood Summit #6. I’m definitely tired, but also overflowing with joy from being around such awesome people that renew my hope in humanity.

As Kim and I pulled away from the barn in the big yellow rental truck, she said, “Even if we never get to do another one, no regrets.”

She was referring to a discussion we had back in 2011, on a chilly night in a cozy cabin in Alaska. We talked about regrets that night, and asked, “If we only had one more year together, is there anything we’d regret?”

The only thing that came up was the “live event.” For years, we dreamed about hosting an in-person conference for Adultitis Fighters. We had experience organizing events and attending retreats. What we didn’t have was the certainty that anyone would come to ours.

We doubted whether or not we’d even get one person to sign up. Long story short, we did. Every single Summit has sold out so far. And every one has been special in its own way.

At the beginning, I had a pretty good idea of what failure looked like. But this time was the first time I thought about what things would look like if we hadn’t even tried.

Most of us, when considering the prospect of pursuing something new – a new project, place to live, degree, career, or relationship – we make a list of pros and cons. Oftentimes, the doubts carry more weight and the cons win the day.

That discussion in Alaska felt very personal, and maybe even a bit selfish. It was about our dreams, our doubts, our regrets. I never considered how much our decision would affect other people. As we drove away in the big yellow truck last Tuesday night, I envisioned a scenario in which we had allowed our doubts to keep us from trying that first one. Suddenly, all the good things that have come from six Escape Adulthood Summits – all the friendships formed, relationships repaired, memories made, light bulbs lit, laughs shared and lives changed – vanish in an instant like smoke in the wind. All the grateful eyes and smiling faces of the hundreds of people who’ve attended disappear from my memory. It’s a sad and terrible thought, enough to bring me to tears.

I am proud that we didn’t give in to the doubts. Mostly because I know how often I have.

Then I think of all the first-timers who attended, and who certainly had doubts about what they were getting themselves into. There is a lot of mystery to each Summit, because there’s nothing quite like it and we have a lot of surprises we keep secret. I hope they are happy they pushed past the doubts, and realize how much of an impact their presence had on the lives of the people they encountered.

Paying no mind to the doubts in our head is a hard thing. But we must.

“Doubt kills more dreams than failure ever will.” – Karim Seddiki

What’s something that you’d regret not giving a shot? Is doubt the thing holding you back? Instead of listing all the reasons it might not work, dream up a vision of what it looks like if it does.

Your courage has consequences that impact more lives than your own.