My Brother, The ‘Stache Master (Almost) 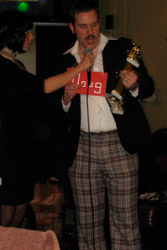 Tonight I am quite proud of my little brother for finishing as runner-up in the highly prestigious Mustaches For Kids competition. Long-time readers may remember me blogging about this event last year. I was supposed to be a judge, but got sick. I was invited to judge this year as well, but had to decline because I was related to one of the entries. My brother Doug, who moved to Madison with his wife late last summer, has been cultivating his mustache for four weeks now. He ended up going as a sleazy van conversion salesman, and put on quite a performance. His improv and acting experience came in handy and was so convincing that I could barely resist the urge to bolt out of there and take a shower. (He really kicked butt in the Mustache Posedown.)

You can have your black tie affairs. They may raise more money, but they’re not nearly as fun or heartfelt as this event was tonight. Nearly $4,000 was raised for the Make-A-Wish Foundation, and I saw firsthand how a little childlike spirit can go a long way to attack Adultitis and make a real difference, too.