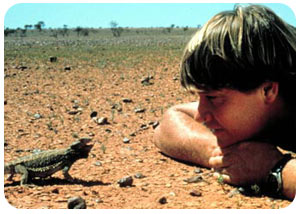 Lots and lots has already been said and written about the late great Crocodile Hunter. But I wanted to call your attention to one more article about Steve Irwin’s death specifically because it really underscores what this blog is all about. Nick Coleman of the Star Tribune observes that Irwin’s passing is “the rarest of tragedies: the death of a celebrity that affects children and adults at the same time.” Here are some highlights:

The 11-year-old next door, who has a collection of insects in his garage that frightens the neighborhood, seemed especially upset. He kept telling me, over and over, “It’s true! The Crocodile Hunter is dead! He got killed!” Around the world, on the other side of the globe, a good-natured Australian nature lover died, and children in Minnesota were upset and unhappy.

Few people ever make a mark that big on Earth.

How many people can you think of that are as equally loved by both kids and grown-ups? I can’t think of many… Mr. Rogers would be up on the list, but most adults developed their connection to him as they were growing up. I, and many others, have only known about Steve Irwin as adults.

In a world of fakers and frauds, Irwin was an authentic adventurer who somehow maintained — for all of his 44 years — the enthusiasm of a child’s encounters with the mysteries of the planet. No one did it better.

Authentic. That’s a good word. Irwin was a great example of someone who was honest about his intentions, and was always authentic, whether he was one-on-one with a croc, in front of a studio audience, or at home with his kids.

Most adults are too busy and too jaded to remember their own Crocodile Hunter encounters. In order to conjure up that feeling in my life, I have to think back to a time when my brothers and I captured skinks in the sandy weeds near our lake cabin, often coming up only with their tails, which the lizards can shed in an effort to avoid capture (scientists call it autonomy, or self-amputation).

I am blessed with small boys who play with spiders and imitate loons and who, through Irwin’s eyes, have seen a world of wonders that awaits them, if it still exists when they are grown… I want them always to be able to love the world as Steve Irwin did. With wide eyes. If they and their generation can do that, then the Crocodile Hunter will never die.

Right on. Steve Irwin is a classic example of what it looks like to go through life delighting in the little things. He taught us to slow down and think about what sort of treasure might be found under the next rock. Please do read all of Mr. Coleman’s article if you get a chance.