I believe that one of the many lessons children have to teach us — if we have the wisdom to pay attention — is to not take ourselves too seriously. Kids are unafraid to run around naked in front of strangers, wouldn’t think twice about giggling in a fancy restaurant, and are willing to walk out of the house dressed as a Hawaiian cowboy ballerina at a moment’s notice. 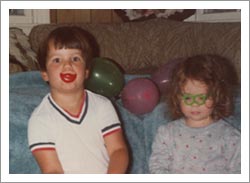 Do we need to emulate their behaviors exactly? Probably not. (I’m sure your relatives will appreciate you being fully clothed this Christmas.) But we can follow their lead and take ourselves a little less seriously. Especially this time of year, when everyone seems to be a wee bit uptight.

I have become a big fan of Scott Ginsberg. He is an author, professional speaker, and expert on approachability, and most widely known as That Guy with the Nametag. He has worn a nametag every single day — over 2,200 days in a row. He has launched a very successful career based upon the stories and wisdom he’s collected over the years, and he has a lot of both.

Scott recently wrote an entry on his blog about this idea of not taking yourself too seriously. Pretty potent, real-world stuff from a guy that has a nametag tattooed on his chest. He has a list of the Top 10 Reasons to Laugh at Yourself Daily. Here are a few of my favorites:

2) Wealth. Film buff Raymond Hitchcock once noted, “A man isn’t poor if he can still laugh.” That’s how powerful this stuff is. And I’d be willing to bet that even Bill Gates and Donald Trump laugh at themselves daily. Especially Trump.

4) Attitude. I admit; I’m not positive and cheery all the time. (Who is?) But I can’t help but think that my attitude has significantly improved over the past six years as a result of self-laughter. It’s like Mitlon Berle said, “Laughter is an instant vacation.” So think about it: how great is your attitude on vacation?

10) Health. I’ve been through some tough times in the past few years, especially in the beginning of 2006 when I spent a week in the hospital with a collapsed lung. And I remember the highlight of the week was when the nurses came in to my room to administer my first chest tube. They pulled down the top of my gown, took one look at my nametag tattoo and couldn’t stop laughing for five minutes. Freaking priceless. No morphine drip can beat that.

Laughter is the best medicine. Laughing at yourself is medicine that helps you AND the people around you.