What To Do When You’re Snowed In 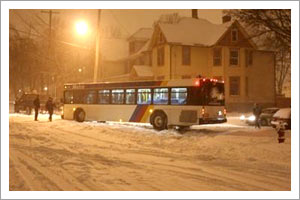 It’s snowing in Madison. Lots. We have a chance to break the all-time snowfall record this weekend. We could get close to two feet of snow, and even got some thunder and lightning last night! It seems as if everything is closed and canceled, and today’s speaking engagement in Cambridge, WI has been postponed for a few weeks.

So, what does one do when one is snowed in for a weekend? Maybe that’s the wrong question. An opportunity like this, after almost three straight weeks on the road, is a perfect opportunity to not really DO anything, but to delight in the little things. Kim spent some time enjoying the company of two little friends. We got a chance to catch up on some of our favorite shows (like Heroes, The Office, Scrubs, and NUMB3RS.) I’ve been listening to some of my favorite tunes as I read and surf the net, indulging in some of the fun stuff I don’t often have the chance to do (like get updated on the latest Apple rumors.) Later tonight, I’ll be commandeering the kitchen to make my famous cheesy beer and brat soup (only in Wisconsin!)

When I was a kid, I prayed for snow days. They were few and far between, but when one did come along, it was worth more than a Willy Wonka golden ticket. Ah, the sweet taste of freedom!

When we get older, and days like these come along, it’s easy to get sucked into a project from work, or get consumed by household chores. While it’s nice to have some extra time to catch up on these things, it’s also important to just “be.” We as a culture don’t do that enough. We spend so much time rushing around that when we get an unexpected free day or two, we get antsy. Instead of seeing this free time as a chance to get MORE done, we should use it to rest, relax, and just “be.”

And act more like human BEings, rather than human DOings.