Trading the Cracker Jack Prizes for the Peanuts

What good is life if you can’t slow down long enough to enjoy it once in a while? 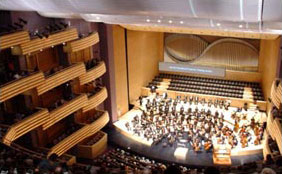 Kim and I had a fortunate opportunity come our way last Friday night. We spent the bulk of the day downtown at a café called Cosi, laptops open, writing, thinking, and dreaming. As we packed up to go home, a young woman (and fellow Mac user) sitting nearby offered us two free tickets to the Madison Symphony Orchestra. Face value was over sixty bucks each. She told us she wasn’t able to use them and was hoping to find someone who could. What the heck, we thought.

A few hours later, I found myself sitting in Madison’s new Overture Center, all spruced up and ready for some culture.

I am sure that the full magnificence of the performance was somewhat lost on me. But I can certainly say that it was wonderful to watch people who are really good at what they do, even if I don’t know the difference between a viola and a cello. A world-renowned pianist was a featured guest. He had a bucket full of prestigious awards that I had never heard of, and yet even I could tell that he didn’t just play music, he lived it. It was a part of him.

It was nice to sit there and take it all in. To relax, just letting the music stir my soul and refresh my spirit. I am grateful for the generosity of that nice Mac girl, whose name I never did get.

Later that night, I stumbled upon a blog post by David Wakerly about a little experiment the Washington Post recently conducted. They wanted to know what would happen if a world-famous classical musician played not in a concert hall, but in a Washington D.C. train station, in the middle of morning rush hour. Would people know who he was? Would they at least realize that he wasn’t your average street musician, and take a few moments to take in the free concert? Would they marvel at his $3.5 million Stradivarius? And exactly how long would it take for his violin case to be filled up with tens and twentys? 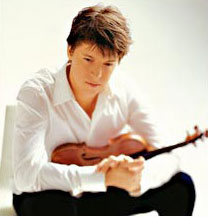 The musician the Post tapped for the experiment was a man named Joshua Bell, a 39-year old, critically acclaimed virtuoso. Ironically, I had heard of Joshua Bell for the first time of my life just hours earlier; he’ll be playing a one-night-only performance in October in Madison at the Overture Center. The full Post article is lengthy, but well worth a read (and it has video, too!).

Bell played some of the most difficult and other-worldly musical pieces known to man for a little less than an hour. Almost 1,100 people walked by.

Only seven people stopped, at least for a minute. Twenty-seven gave money — some just pennies — for a total of $32.17.

1,070 of the people rushed by, most not even giving the performer a quick glance.

The Washington Post interviewed people after they passed by. One man, Calvin Myint, walked four feet from Bell, and didn’t even have a memory of seeing a musician anywhere. He was wearing his iPod.

The song that Calvin Myint was listening to was “Just Like Heaven,“ by the British rock band The Cure. It’s a terrific song, actually. The meaning is a little opaque, and the Web is filled with earnest efforts to deconstruct it. Many are far-fetched, but some are right on point: It’s about a tragic emotional disconnect. A man has found the woman of his dreams but can’t express the depth of his feeling for her until she’s gone. It’s about failing to see the beauty of what’s plainly in front of your eyes.

We are prone to that, aren’t we? We get so caught up in things that we miss some of the best parts of life.

In my presentations, I often liken these little details to Cracker Jack prizes. God has scattered these free prizes all around us: a watercolor sunset, the smell of fresh cut grass, the intricacy of a snowflake. We’re so busy being self-absorbed and stressed-out that we miss them all, because they’re hidden just below the surface of our hurried consciousness. How sad must it be for the Creator of the Universe to have made all of these spectacular Cracker Jack prizes for us to enjoy, while we mindlessly pass them by every single day. Brennan Manning writes along this same vein in The Ragamuffin Gospel:

We get so preoccupied with ourselves, the words we speak, the plans and projects we conceive, that we become immune to the glory of creation. We barely notice the cloud passing over the moon or the dewdrops clinging to the rose petals. The ice on the pond comes and goes. The wild blackberries ripen and wither. The blackbird nests outside our bedroom window, but we don’t see her. We avoid the cold and the heat. We refrigerate ourselves in summer and entomb ourselves in plastic in winter. We rake up every leaf as fast as it falls.

The reality of these words is heartbreakingly true. But it wasn’t always this way for us. We were all children once. For the Post story points out:

There was no ethnic or demographic pattern to distinguish the people who stayed to watch Bell, or the ones who gave money, from that vast majority who hurried on past, unheeding. Whites, blacks and Asians, young and old, men and women, were represented in all three groups. But the behavior of one demographic remained absolutely consistent. Every single time a child walked past, he or she tried to stop and watch. And every single time, a parent scooted the kid away…

…The poet Billy Collins once laughingly observed that all babies are born with a knowledge of poetry, because the lub-dub of the mother’s heart is in iambic meter. Then, Collins said, life slowly starts to choke the poetry out of us. It may be true with music, too.

It saddens me to think of how many times I have obsessively concerned myself with the trivial, while missing the magical. Oh, how tragically often do we trade the Cracker Jack prize for the peanuts?

The problem is a grave one. Edna Souza shines shoes at L’Enfant Plaza. She is from Brazil, and was there the day Joshua Bell performed for an audience of ghosts, and she knows the problem firsthand. She sees it every day.

Souza was surprised to learn he was a famous musician, but not that people rushed blindly by him. That, she said, was predictable. “If something like this happened in Brazil, everyone would stand around to see. Not here.”

Souza nods sourly toward a spot near the top of the escalator: “Couple of years ago, a homeless guy died right there. He just lay down there and died. The police came, an ambulance came, and no one even stopped to see or slowed down to look.

“People walk up the escalator, they look straight ahead. Mind your own business, eyes forward. Everyone is stressed. Do you know what I mean?”

The home page of Adultitis.org claims that Adultitis has transformed people into zombie-like doo doo heads. I marveled at my cleverness when I first wrote it, but now my stomach turns from its truth. The epidemic marches on, choking the beauty and value of life out of each successive generation. Its life-stealing shackles are passed down to our children like some sort of twisted family tradition.

I believe there is hope. The choice for change is our own. Opportunities to turn the tide present themselves every day. Sometimes in the form of a violin virtuoso on your morning commute, sometimes in the form of free tickets from a stranger when you’re tired and just want to go home. I am grateful that I took the opportunity to experience the orchestra Friday night, to drink in a moment I am richer for, and won’t soon forget. The struggle against Adultitis is a daily one, but one worth fighting.

Gene Weingarten says in his Post article, “If we can’t take the time out of our lives to stay a moment and listen to one of the best musicians on Earth play some of the best music ever written; if the surge of modern life so overpowers us that we are deaf and blind to something like that — then what else are we missing?”

An awful lot, it turns out.