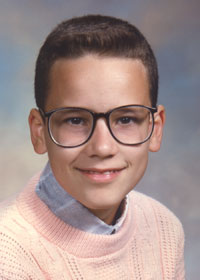 I got my first pair of glasses in eighth grade. “Oh great,” I remember thinking. “Now I’m going to be one of those people.” I figured the least I could do was select a style that would be cool.

For some reason, I thought big brown frames with lenses the size of dinner plates fit the bill.

Since then, I’ve gone through quite a bit of frames, including the horribly bad clear plastic cheapos that were the best of the worst in an emergency late night mall trip. I busted lots of frames over the years. I attributed it to my aggressive, living-on-the-edge lifestyle, but it probably had more to do with the awkwardness of puberty (good times). In a cruel twist of fate, the nasty clear plastic ones lasted the longest without being broken (good riddance, sophomore year).

I even went through a contact lens phase before ultimately deciding that glasses were easier and I got comfortable with the idea of being “one of those people.” One thing that hasn’t changed is that I’m still near-sighted. Things far away get blurry — fast.

I was thinking the other day that it seems to me that glasses or no, most people are either more near-sighted or far-sighted. But I’m not talking about traditional eyesight anymore.

Near-sighted people can see things close up very clearly. Sometimes too clearly. They focus on the here and now — and all of the problems, troubles, and daily distractions that go with it — while the things far away get fuzzy. They miss the big picture, and have a very hard time dreaming big. They’re the kinds of people who, when asked, have a hard time verbalizing where they see themselves in five years. They might say something like, “I’m just trying to get through the day!”

Far-sighted people, on the other hand, spend most of their time looking at far away things. They’re consumed by the next big thing: the big promotion, the bigger house, the fancier car, the upcoming extravagant vacation, the next rung up on the corporate ladder. Those things they can see clear as a bell. Unfortunately, the little things — the wonderful small but amazing things right under their nose — are completely missed. These are the people Dale Carnegie was talking about when he said, “One of the most tragic things I know about human nature is that all of us tend to put off living. We are all dreaming of some magical rose garden over the horizon instead of enjoying the roses that are blooming outside our windows today.”

I think kids all start out with pretty much 20/20 vision. Kids don’t let the bumps and bruises that happen in life keep them from dreaming big. But they also don’t get so preoccupied with future plans that they miss the neat little unexpected surprises, like a penny on the sidewalk, or a ladybug crawling up a blade of grass.

We all had pretty good vision as kids. Unfortunately, most of us grew up to become one of “those people.” But our vision can be corrected. We just need to look at life through some new glasses (preferably not the clear plastic ones that make you look like your face is protected by a wall of bulletproof glass).

So, how about you? Are you more near-sighted or far-sighted?