How to Mess Up Your Vacation 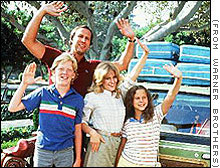 They try to jam as much into it as inhumanly possible and miss the whole point. They plan too much, expect perfection and relax…not at all. Have you ever returned from vacation feeling more tired than the day you left? Join the club.

Yet another thing adults could learn from kids.

Grown-ups get all caught up in the details of planning, making sure they cram as much stuff as possible into every waking minute. Because of this, they easily get frustrated when things don’t go exactly as planned (which for some reason, comes as a surprise). At best, that frustration can lead to missing out on the little opportunities to create great memories, and at worst, it can ruin the whole trip for everyone. It’s easy to forget that the little things that happen along the way are the most memorable.

When I was a boy, my family took a little trip to Hannibal, Missouri, the boyhood home of Mark Twain. Here are the two things I remember from that vacation: There was one museum we went to that had some killer dioramas of scenes from Tom Sawyer. I was amazed at all the tiny detail, and wished I could take them home to play with them. The other thing I remember was going out to eat at a local pizza parlor that had unusually sweet root beer and pizza that was even better than Pizza Hut’s (which until that point in my life, I thought was completely impossible.)

These were certainly not what one would consider “postcard moments.” But twenty years later, they’re still with me, along with the happy feelings of spending time with my family doing new stuff.

A recent article by Judith Kirkwood over at WomansWallStreet.com has some insightful things to say about this, including a little confession:

I tend to approach family vacations like a general planning a battle. I marshal resources, circle targets, and muster the troops to follow me no matter how heavy the fighting. But I am slowly learning that my job may be to follow rather than lead. The little things that happen along the way are always more memorable than anything that involves a museum, monument, or long line, even at the most exciting theme park in the world.

…Nina Senatore, a specialist in children’s developmental issues at Simmons College, (says) “Parents think in terms of what will make a great memory, but kids live in the present. They can learn about a culture by having an ice-cream cone while watching a mariachi band in El Paso, or sitting in a café in Florence and starting up a conversation with another child.”

It’s June, and in the northern Hemisphere, summer is upon us. Traditionally, that means vacation time. For those of you planning a getaway, take some cues from kids. Don’t mess things up or wear yourself out by trying to do too much. Live in the present. Take to heart what Judith Kirkwood learned: “What I have discovered is that a vacation is not a scene from a movie or a picture from a magazine that comes to life. It’s a feeling of peace and pleasure, an opportunity to slow down; a time to walk through a park or sit in a cafe a few minutes longer.”

Think of your vacation in those terms and you’ll not only come back rested, but you’ll collect wonderful memories to last a lifetime.