Death of the Grown-Up 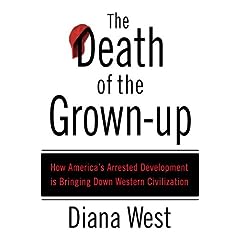 Will the death of the grown-up bring about our downfall? Could be.

You may be asking, “How can you write this, Mr. Author of Escape Adulthood: 8 Secrets from Childhood for the Stressed-Out Grown-Up?”

The book, The Death of the Grown-up: How America’s Arrested Development Is Bringing Down Western Civilization by Diana West, is supported by many well-known conservatives. I suspect that it might veer off to an extreme tangent, but I agree with many of its premises. Parents spend way too much time trying to be their kids friends rather than their parents. We are way too politically correct these days, at the expense of truth. We have emasculated the heroic ideal. And I think many Americans are, as Michelle Malkin describes, “self-absorbed brats.”

Even though I have yet to read the book (It’s due out later this month), it appears that it’s a classic case study of the difference between being childlike versus childish. Because isn’t a brat a fitting label for someone who is being childish?

If you want to find out how to be more childlike, read my book.

If you want to find out how NOT to be childish, read this one.

The problem lies in polarization. The voices most often heard in today’s media-driven culture are either left-wing conspiracy theory wackos or close-minded right-wing fuddy duds. Most people don’t fit in either box(which is why all politicians move more toward the center during national campaigns).

Since we’re swimming in tidal waves of information, we like things neatly summarized in simple little all-or-nothing boxes. That’s what makes contrasting — and polarizing — messages like “Screw responsibilities, have fun!” and “Get back to work or we’re all going to die!” get advanced so easily. But life doesn’t usually work that way. It’s not an all or nothing proposition. Radical Islam is not the same as true Islam just as extreme fundamentalism Christianity is not the same as true Christianity.

Yes, we have too many adults who act selfishly and immaturely at the expense of their family and our society.

We also have too many adults who have a fistful of pencils rammed up their rear. To say they take themselves too seriously would be like saying Tiger Woods is a good golfer.

It might not be a very sexy, headline-grabbing message, but somehow, we need to meet in the middle.

Because just as the death of the grown-up really could bring down Western civilization, so could Adultitis.