Life As A Daring Adventure

Kim and I are in Arizona this week. It’s hotter than the inside of an Easy Bake Oven.

After a speaking engagement in Scottsdale on Sunday, as I signed books for busy moms and teased little kids, I noticed an elderly woman standing quietly in the background. She looked like she was waiting for the crowd to clear out. Once the activity level died down, she and her walker made their way over to the table where I was sitting. “I want to share a story with you,” she said eagerly.

Dorothy was her name, and she informed me matter-of-factly that she was eighty. Her wispy, silver hair framed her plump face and sparkling eyes.

One of the things Dorothy decided to do was book a flight to meet her brother for lunch. They didn’t see each other very much; he never had the time and she never had the money. He took a half day off (”He never does that!”) and picked her up at the airport. They had a delightful lunch with his wife and family. 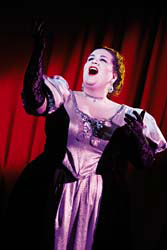 “My brother is kind of a workaholic. For the life of him, he couldn’t figure out why I was there,” she said. “I told him, ‘I’m here because I love you and I wanted to spend time with you.’ It was probably the best gift I could have ever given him.”

“And then I surprised my husband when I told him we were going to Hawaii,” she continued. “‘What?! You’re crazy!’ he said. ‘People like us don’t go to Hawaii.’”

A year later, they were in Hawaii.

I could see the childlike joy shine from her eyes as she described traveling to Italy for the opera, another lifelong dream. “It was so wonderful!” she exclaimed. “They so love their opera over there. The old theater was beautiful, so opulent—and it was even an opera I knew!”

“I had so much fun doing all of those things,” Dorothy continued. “I’m sure it was one of the reasons I was cured.”

Now just minutes earlier, I had been encouraging a roomful of people to make the most of their days, slowing down enough to appreciate life’s captivating details, and being brave enough to chase their dreams. But if everyone had had the chance to hear Dorothy tell her story and see firsthand the effervescent life in her blue eyes, my words wouldn’t have been needed.

And I’d be fine with it.

But instead, most people work late into the night, rushing around like pinballs in a noisy arcade game, desperately trying to keep up with an impossible standard, even though something deep inside yearns for something different. Sadly, it often takes a doctor telling you that your days are numbered before you begin to make some changes.

And that’s if you’re lucky enough to get a warning.

I am more certain than ever that God intended our lives here on earth to be more like the one Dorothy described: exciting, invigorating, and filled with moments of wondrous awe and giddy delight.

I think that when we get to heaven, it might be like returning home from a long trip. The angels and the saints Most people are rushing around like pinballs in a noisy arcade game. will crowd around us, eager to hear the tales of our life.

“Who did you meet? Who captured your heart? What did you see? Wasn’t the sunset over the ocean great? How impressive was that opera?” These are the questions they’ll ask us, and they’ll even be patient and sincere enough to want to see all our pictures and watch all of our home movies.

How sad would it be for them to hear you respond, “People like me don’t do that sort of stuff.”

Whatever is in your heart to do, do it. Write that letter. Make that call. Take that trip. Helen Keller was right when she said, “Life is either a daring adventure or nothing.”

Live life daringly. You only get one.