An Experience So Grand

I’m not sure it’s possible to explain the Grand Canyon experience in words. Or pictures. Or anything else, for that matter. Talk about an escape from adulthood and all its worries and stresses!

The ride north from Phoenix was a treat in and of itself. We took the “scenic” route through Prescott, Jerome, and Sedona. In the desert, the cacti looked like prickly green fingers pointing to the bright blue sky. As our elevation increased, the rock formations reminded me of old men with wrinkled faces and sunburned cheeks, looking over the pine trees standing at full attention like a million green soldiers. And Sedona’s horizon was set ablaze by its famous fiery red rocks. 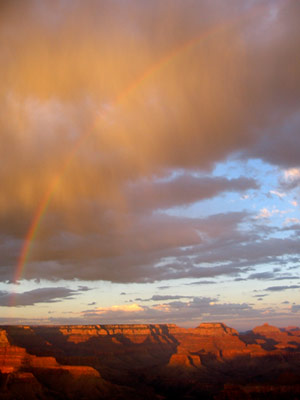 But all of that was just an appetizer for the spectacle that was to come. I have never had such little use for a camera in my life. Oh sure, I took a zillion photos, but every glance at the viewfinder after each shot left me terribly disappointed.

It was fascinating to see everyone else furiously trying to record the experience, too. It made me smile at our humanness. So tremendously overwhelmed at the site before us, we struggled to let our cameras capture what words could not. But it was all in vain; capturing the beauty, the breadth, the brilliance of the Grand Canyon with a camera is like trying to recite the alphabet with only two letters. If a picture is worth a thousand words, then it’s about nine hundred, ninety-nine thousand short.

We were lucky to have many highlights in our short stay. Among them being the chance to see the sunset and the sunrise over a natural wonder that may be known for its sculpted rock formations, but trust me, the light is the real superstar. And as the sun was setting, a light rain fell in the canyon, revealing one of the most brilliant rainbows I have ever seen.

We had a chance to watch an IMAX movie about the Grand Canyon — the most watched IMAX movie of all time — and during it, the narrator pondered the canyon’s mysterious origins. “Did it come from the hand God, or was it a work of nature?” he asked, curiously. Those sorts of questions always make me laugh. As if it’s an either/or proposition. Who do they think created nature?

A night earlier, after I had finished giving the keynote presentation at the Catholic Cemetery Convention (one of my most interesting gigs, to be sure) Kim and I took the opportunity to do some stargazing. The Marriott offered the complimentary experience, hosted by a real-life astrologist with a pretty nice telescope. We got to see the moon up close and personal, and Jupiter and a few of its moons, too.

Between the the stars and the Canyon, I don’t believe I have ever felt so small, or so sure of the existence of God. Sometimes I wonder why He bothers at all with the human race, but then again His ways are not my ways; His overwhelming creation testifies to that.

Experiences like standing on the top of the mountain, sitting on the edge of the Grand Canyon, or gazing into the starry depths of the universe really bring me back to childhood. It was that time when everything was new, and big, and awesome. Curiosity was limitless; you could never know enough. As we get older, we often take on this cocky, unimpressionable, I’ve-seen-everything attitude.

Nature — God’s nature — has the ability to knock us off our pedestal to remind us that we are not as big as we think we are, but also to assure us that there is an order to everything. And that even in the desert, there is life, and there is hope.