Two Truths and a Lie in Monterey (Revealed!)

In regards to my previous post where I listed to truths and a lie about our recent trip to California, I’d like to shed some light for those of you wondering which one was the fabrication.

1) We DID have our program briefly interrupted by an earthquake, the first one I’ve ever experienced. Although we were about an hour away from the epicenter, we all felt the effects of the earthquake that registered 5.6 on the Richter scale, the largest one in California since 1989. It was weird, but kind of cool. I secretly wished I was in one of the stores in San Jose where items were falling off the shelves, but that was only after I heard there was no major damage or injuries reported.

2) We DID get to see the only great white shark in captivity in the world at the Monterey Bay Aquarium. It was nowhere near the size of Jaws — he was just a young whippersnapper — but it was still pretty cool. I love being (safely) near animals that project an enormous sense of power, like silverback gorillas, African lions, and sharks. I guess it gives me a glimpse of how little I am and how powerful God is, what with his ability to create such mighty, awesome animals. On the other hand, I love his intimate attention to detail and the personal touch seen in a delicate jellyfish smaller than my thumbnail. Yep, God is quite the craftsman. 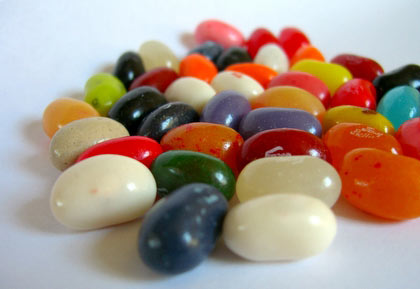 It was Halloween, and Kim and I were longing for the days of Trick-Or-Treating. As we strolled the shops on Cannery Row in Monterey, we stumbled upon a candy shop. It had almost every candy imaginable. On the spur of the moment, we gave ourselves permission to each grab a bucket and fill it with our favorite candy. Talk about feeling like a five-year-old again! For a while we actually experienced “candy block,” unable to put anything into our buckets. It took a while to believe that our grown-up selves had actually given our childlike selves the green light to splurge on the sugary sweets.

It was glorious. What made it so fun was remembering that one of the frustrating parts of Trick-or-Treating was getting candy that you really didn’t like. You’d come home after a long night of pounding sidewalks and ringing doorbells, dump out your loot, and survey the intake. Inevitably, there was always a third of the candy that caused some level of disappointment, and was either offered up as trade bait or relegated to the bottom of the barrel and finally thrown out when Easter came around.

But this was different. Of all the candy up for grabs, I had the option to fill my bucket only with favorites. The freedom was downright exhilarating! They had the infamous orange circus peanuts there, but I left them for some other sad sack. My bucket got filled with Skittles, Chewy Sprees, Sour Patch Kids, Boston Baked Beans, Reeses Peanut Butter Cups, a personalized selection of Jelly Belly jelly beans — and more!

Did I mention how glorious it was?

Of course I ate more candy than I should have — so much goodness made it hard to choose — but it was such a delightful experience that made for a fun Halloween (and the start of a tradition I think needs to continue). It was an interesting case study of how removed we can get from our childlike spirit when our responsible adult selves get so used to running the show. It takes a while to remove the rust. It reminds me of a line Kim sometimes uses in our speaking program when she describes her answer to the perplexed Olive Garden waitress wondering why on Earth she would order dessert first:

“Because I can,” Kim replies.

As children, we long for the opportunity to finally have the chance to call our own shots and make our own rules as adults. It’s sad how little we wield that power when we grow up. We worry too much about what other people think, fearing to look a little silly.

I have come to realize that everybody is aching for a little silliness; they’re just waiting for someone to give them permission.