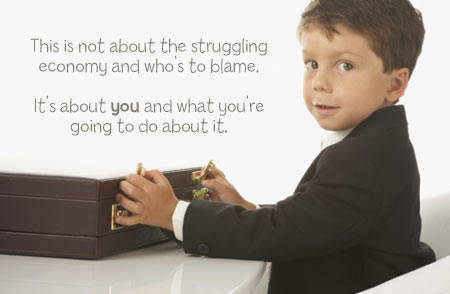 Old people are often accused of being stuck in their ways.

“Old” is a relative term, though. It does seem to be that as our age climbs, we tend to get more comfortable and less open to change. But that can begin to happen just as easily when you’re in your twenties as when you’re taking advantage of the senior citizen discount at Applebees.

This little trait doesn’t usually serve us all that well. Even less so during economic recessions.

The doom and gloom is everywhere. The media gleefully heaps on the bad news daily. Politicians are wasting trillions of our money on false promises and passing the problem to future generations. There are a number of reasons why we got into this mess, and plenty of people who can share the blame, but ultimately, there’s a certain cyclical nature to it all. Just as summer can’t exist without winter, booms can’t exist without the busts.

But this post is not about the struggling economy and who’s to blame. It’s about you and what you’re going to do about it.

Frankly, there’s not a whole lot you can do about the macro situation. But in the micro situation, all of the shots are called by one person: you.

The way I see it, you have two choices. You could resist change, hunker down and fearfully wait for the worst to happen. Or you could look at this situation as a child would, with big dreams, boundless optimism and a vision of what’s possible.

Thomas Edison invented the incandescent light bulb in the middle of the Panic of 1873, a six-year recession. He established GE (General Electric Co.) in 1876, which is now the third largest company in the world.

In the late 1970s, we experienced a major energy crisis and inflation ballooned out of control, causing a major recession, which lasted for 30 months. In the midst of the economic storm, Applebees, Ben & Jerry’s, Olive Garden and Fuddruckers were founded. In 1981, IBM sold their first personal computer.

In fact, all of the following companies were formed during a recession: Burger King, The Jim Henson Company, FedEx, CNN, Hewlett Packard, MTV, Hyatt, Trader Joe’s, Sports Illustrated and Wikipedia.

The people who will survive this recession are not the frustrated ones hoping for things to get back to the way they were. Not gonna happen. The ones who will survive — and thrive — will be the ones who embrace the changes and take advantages of the plentiful opportunities that abound.

Unfortunately, no politician or trillion-dollar buyout can give you the ability to see through new eyes and find the opportunity that is right under your nose.

Fortunately, there is a child inside of you that is already well-suited for the task.