Too Old To Draw

At a speaking engagement in Fort Worth, Texas, we passed out paper and crayons to the audience and asked them to draw a funny picture with the intent of hiding it in an unexpected place for someone else to find. We call it a Doodlesmile. Eager for the opportunity to draw with crayons, most of them dove right in.

Except for a nice-looking lady in her seventies.

She sat with her paper blank and her arms crossed. My brother-in-law, who happened to be sitting right next to her, asked, “Aren’t you going to draw something?”

Too old to draw? Hmm. I guess Crayola must have added an age limit warning on their box that I’m not aware of.

This is yet another up-close example of what Adultitis looks like. It might be easy to assume that this is an inevitable development as people get older. But this is simply not true. 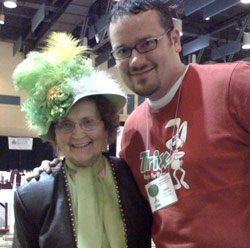 Age has nothing to do with your level of Adultitis.

Take, for example, another woman I met at a gig in Madison. She was easy to spot in the audience because she was wearing a bright lime green hat decked out with feathers and flowers. Her name was Vi, and she claimed she had a collection of well over 200 hats. I asked her if it was difficult to pack the hats for the conference she was attending.

Three? For today? My mind was immediately flooded with the stories Kim has told me of how she used to change her clothes several times a day as a child (much to the chagrin of her mother.)

Vi had a remarkable childlike spirit. I was clearly preaching to the choir when it came to Adultitis, as she certainly didn’t seem to have much of it. And I would guess that she was somewhere in the neighborhood of 80, although I’ve seen 50-year-olds with less spunk and vitality. 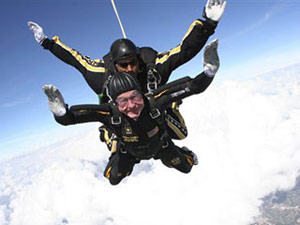 When it comes to Adultitis, attitude is everything. Some people live by rules that don’t exist, believing that one can somehow become too old to draw, or that it’s inappropriate to do things like jump out of a plane on your 80th birthday. (Thanks for breaking that rule, Mr. President.)

Interestingly, after Fort Worth lady was peer-pressured into picking up her crayon and drawing a simple doodle, she ended up sketching a remarkably beautiful doll. Not bad for someone who’s supposedly too old to draw. It’s sad to think of how much talent and joy this world is missing out on because we think we’re too old for something.

It is my intention that I shall never outgrow superhero movies, sugar-laden cereal, or collecting fun retro t-shirts. How about you? What will you never be too old for?