Shedding Light On What Keeps You Up At Night 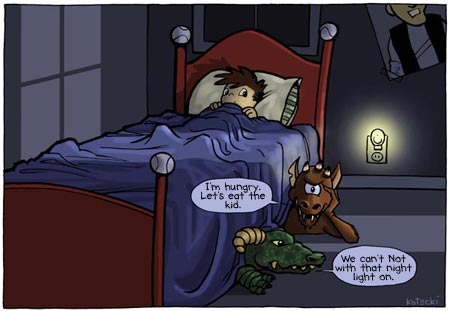 When you were little, were you ever afraid of the dark? I sure was. From horns and hair to scabs and skeletons, thinking about what lurked among the shadows was an all-you-can-eat buffet for my imagination.

In fact, I may not have made it through childhood without that humble but powerful life-saving device known as the night light. Although small in size and wattage, it did a remarkable job of keeping the creepy-crawlies at bay. Without it, I’m sure I’d have long been digested in the belly of a slimy beast from the netherworld known as “Underthebed.”

Many lives have been saved by the simple night light. Perhaps it wouldn’t have been needed if we only believed the advice from our parents: that there really aren’t any monsters under the bed; they’re only in our imagination.

Perhaps that is because grown-ups also deal with monsters. They just live in a different place. You see, as we get older and grow up, the monsters take up a different residence. They move out from under our beds, and move up into our…heads.

How many times have you laid awake at night, worried, scared, or anxious about any number of things? This stuff keeps us up, and it can wreak some terrifying results.

But our parents were on to something when they tucked us into bed and tried to calm our fears about the monsters. You know, the part where they told us that the monsters only exist within our imagination.

That’s the key word to keep in mind: imagination.

Think back to when you were five-years-old. Maybe you had a window in your bedroom. And maybe just outside that window was a tree. By day, that tree looked like an ordinary tree. Harmless. Almost friendly, even.

But at night, that tree cast some weird shadows into your room. Right before your eyes, it somehow transformed into an enormous, ravenous T-Rex, with dagger teeth and jagged claws, ever-reaching in your direction. Ominously, it eyed you, tucked into your sheets and blankets looking a lot like a ravioli-shaped midnight snack.

And yet, looking back with the advantage of years and wisdom, it’s obvious that there really wasn’t a T-Rex lurking just outside your bedroom window. It was just that tree, casting shadows that our imagination ran wild with, concocting spine-chilling possibilities that we couldn’t help but believe. It all seemed so convincing.

Our imaginations are pretty good at what they do.

Here’s the thing. As adults, no matter how creative we think we are (are aren’t), our imaginations don’t shut off. The stuff that keeps you up at night now is still largely the product of a very overactive imagination.

That’s not true, I hear you saying. The stuff I’m worried about is real-world stuff. Things like my job and my mortgage and my kids.

Ok, I hear you. But now hear this: Most of the stuff we worry about never happens.

I’ll say it again. Most of the stuff we worry about never happens.

Think back over the last year and call to mind all of the things you spent time worrying about. I’ll bet you that most of the stuff didn’t amount to anything at all. And the few things that did come to pass were nowhere near as frightening as your imagination led you to believe.

Just as it did with the ominous shadows slithering across our bedroom floors, our imagination takes kernels of doubt and the vast unknown and concocts it into a possible future outcome. An outcome that more times than not gives us the heebie-jeebies.

It is an interesting trait of human nature that when it comes to imagination and our future, we automatically go more toward the negative than the positive. Think about it. You hear rumors about possible layoffs at work. Do you naturally assume that your job will be unaffected and begin expecting a promotion? Or does your train of thought lead to a scenario that has you being the first one cut, resulting in you being unable to pay your mortgage, having your house foreclosed, and living under a bridge eating Spam out of a can?

The negative outcome tends to be where our imagination spends its time, and it’s the one that keeps us up at night. So what’s a person supposed to do about this?

Here’s what I am proposing. First, let us acknowledge the stuff that contributes to our uncertainty and anxiousness is largely attributable to our imagination. Once we can accept that, then let us put our imagination to work for us, instead of against us.

If you are wracked with fear over a particular issue, be it relatively large or small, begin by letting your imagination do what it wants to do anyway: go negative. That’s right, pull out a sheet of paper and write down the absolute worst possible outcome you can imagine. This should come quite easily, as it is the thing that’s been stealing your peace of mind for so long. Don’t leave out any gory details, including instantaneous death by embarrassment or a new career as a bum or bag lady.

Now, once you are scared senseless and ready to pee your pants, take out another sheet of paper and write down the best possible outcome you can dream up. It may take a while for your imagination to kick into high gear, but when it does, reach for the sky. We’re talking fantasy land, pie in the sky, Hollywood-couldn’t-write-it-because-it’s-too-unbelievable type of stuff. Have fun with it.

Okay, now that you’ve balanced things out a bit, take out a third (and final) sheet of paper and write down what you imagine to be the likely outcome to your particular scenario. This will probably fall somewhere in between the first two outcomes. It might be a bit uncomfortable or unpleasant, but it will be nowhere near as terrifying as you first suspected. Take comfort in the knowledge that God never gives us any more than we can handle.

This activity is a simple one, but if you give it a shot, it won’t be long before a sense of peace starts to descend upon you. Writing out the scary stuff that’s in your head is like shining a light on the situation. It clarifies the facts – that tree really is just a tree – and helps us to see just how ridiculous our initial assessment of the situation really was.

A T-Rex?! Phfffft. Those went extinct a million years ago!

The monsters that terrorized you years ago have much in common with the ones that kept you up last night. Our imagination is a powerful tool, and with a little guidance, it can serve as a helpful night light that guides us to a present peace and a future that is better than we ever expected. Sweet dreams!