Anticipating The City of Blinding Lights 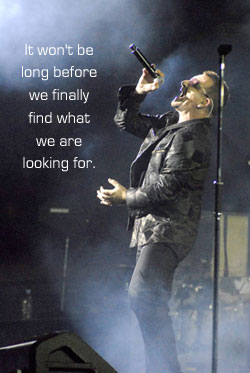 Sometimes I miss the anticipation of Christmas Eve. Trying to will myself to sleep as my mind raced imagining what Santa might leave under the tree seemed a lot like torture at the time.

Looking back, I see that it was probably the best part.

I was fortunate to experience some of that childlike anticipation recently when Kim and I went to see U2 kick off their North American tour at Soldier Field in Chicago. Bono and the boys are probably our favorite band, and seeing them perform live was on the ol’ Bucket List. As we sat in the stadium ogling over the monstrous stage assembled for the tour, I noticed and reveled in the anticipation that was in the air. As the stadium filled with buzzing fans, we made our guesses about the opening song and shared our wish list of tunes we hoped the band would play. We couldn’t wait for the lights to go down and see U2 step onto the stage. It Christmas morning all over again.

And Santa came with a bag full of gifts.

U2 was on. Bono strutted across the stage singing each note with passion. The Edge wailed on guitar. The audience joined in on every song. The energy was electrifying, the light show inspiring, and the 54-ton cylindrical video screen was breathtaking. According to the Chicago Tribune, U2 delivered one of the best live shows of the decade.

Sometimes I lament the fact that adulthood has less built-in moments of anticipation than childhood. But maybe that’s not the case at all. Maybe we’re just more cynical. As adults, we often don’t allow ourselves to experience the joy of anticipation because we know all too well that it doesn’t always live up to the hype.

A case in point came the very night after the U2 concert.

As a huge Chicago Bears fan, I’ve never anticipated the start of a season as much as this one. During the offseason, we finally got an honest-to-goodness, NFL quarterback. For real. The opening game was against the Packers, our biggest rival. I knew it would be a tough challenge, but my imagination had Jay Cutler zinging touchdowns all over Lambeau Field and the defense giving Aaron Rodgers a wedgie while eating his lunch. If we could beat the highly-touted Packers in convincing fashion, perhaps a Super Bowl Shuffle would be in the cards? I could barely contain myself with the excitement over the possibilities.

Unfortunately, that excitement turned into agony. Instead of touchdowns, Culter went with interceptions. After shooting ourselves in the foot with stupid mistakes, the Packers went for the jugular and scored a heartbreaking touchdown in the last minutes of the game. I woke up Monday morning to find out that our star linebacker is out for the season with a dislocated wrist.

Still, the anticipation is what made the game more exciting, and it provided an intoxicating feeling of hope. I think anticipation makes life more exciting. And with negativity and fear everywhere you turn these days, I think we need it more than ever. Fortunately, there is something to anticipate that is guaranteed to live up to the hype.

It says in the Bible that “No eye has seen, no ear has heard, no mind has conceived what God has prepared for those who love him.” What that means is no matter how many sleepless nights we spend trying to imagine how cool Heaven will be, we’ll never even come close. For someone who has a pretty good imagination, that’s pretty exciting.

Even though the current headlines are swamped with swine flu fears, global economic disaster, job losses, and terrorism, it’s important to remember that no matter how difficult your present situation is, this is all only temporary. Very much so.

Don’t let fear paralyze you and rob you of the years you have left to live. Embrace every moment and take advantage of every opportunity to make the most of this life, knowing that by the grace of God, an even better one is just around the corner. It won’t be long before we finally find what we are looking for.

Indeed, we are made for a city of blinding lights. One without interceptions.