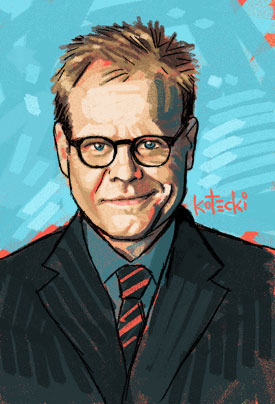 I recently got a copy of Good Eats: The Early Years by Alton Brown. To paraphrase Ron Burgundy, if you don’t think it’s the greatest show on television, I will fight you. As a Food Network junkie, I dig Alton’s quirky, fun, no-nonsense style. Between writing books, filming Good Eats, hosting Iron Chef America and The Next Iron Chef, and appearing in all kinds of Welch’s commercials, he certainly seems to have a lot of burners lit. As I perused the acknowledgements, I came across his thoughts regarding his 10-year-old daughter:

“I especially want to thank Zoey for putting up with all the late nights and early mornings, and all the books she had to read alone. You’re my pride and joy, kid.”

I think that’s just about the saddest thing ever written. Am I the only one?

This is what I want to say to Mr. Alton Brown:

Give up one — just one! — of your projects and go read a damn book to your kid.

But that wouldn’t be fair. I don’t really know about the dynamic between Alton and his daughter. What I DO know is that in my travels around the country speaking to various audiences, there are way too many dads who miss big chunks of their kids’ childhood only to suffer the consequences when it’s too late.

I have a friend who has candidly spoken about his contrasting relationships with his two daughters. He was on the road as a traveling salesman for much of his first daughter’s childhood. He missed a lot. He made some life changes that allowed him to be more present for his second daughter’s early years. Today, his relationship with her is solid and rewarding, while his relationship with the oldest girl is strained, distant, and spoiled by resentment.

When you’re not around much when your kids are growing up, they aren’t comforted by the idea that you’re helping a lot of people. They don’t need nearly as much of the things that your “making a living” pays for. And your definition of “quality time” probably doesn’t cut it.

To them, the message is loud and clear: other people and other things are more important to you than them.

Success is intoxicating. In your chase for more of it, don’t lose track of what’s really important.

Because when it’s too late, a few sentences scrawled in some book aren’t going to make up for all your time away.