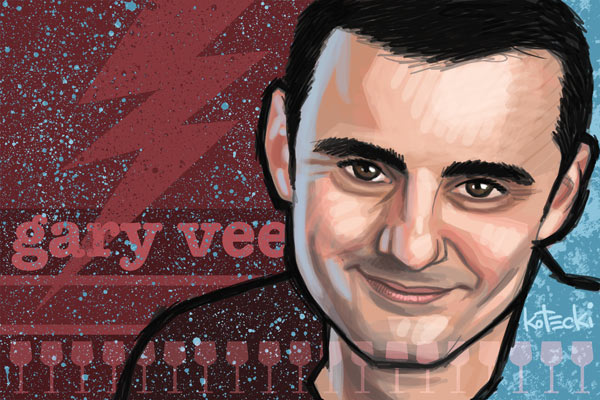 [This article was originally published over at Dumb Little Man. There is a great discussion to be found in the comments, including one from Gary himself!]

I am a huge fan of Gary Vaynerchuk. If you’ve never heard of him, he became famous for his online TV show, Wine Library TV, in which he brings wine tasting to the masses. Rather than being uppity and condescending, Gary’s everyman style is down-to-earth, passionate, and fun. (He’s been known to compare wine to various breakfast cereals.) 2009 was a breakout year of sorts, with the publishing and promotion of his best-selling book Crush It.

Here’s what I love about Gary Vee:

1 • His admonition that in order to become successful, you need to hustle. Hooray! Finally someone on the internet that is not selling seven easy steps to make a bajillion dollars in four minutes a week. The people who accomplished really big stuff did it with a lot of freaking hard work.

2 • His personable style. Gary is the man when it comes to connecting with his community. It comes down to one word: he cares. Okay, that’s two, but there’s no doubt that Gary is sincere in his love and appreciation for his fans and customers. Most businesses could use more of that.

3 • His childlike passion and enthusiasm. Not just for wine, but for life in general. Watch Gary for five minutes and you’ll see a little boy who treats every day like Christmas morning.

Understandably, many people are eager to hear what Gary has to say about making it big and are willing to adopt his tenets in order to achieve their own success. But I find it alarming how often we chase down the secrets to success (whatever that is for us) without ever stopping to consider the side effects of the ideas we are so eager to implement.

In his speeches, Gary often advocates 18-hour days as a necessity for becoming successful. He certainly practices what he preaches. The long hours he works are common knowledge to those who follow him. With book promotion, media appearances, speaking engagements, consulting work, and his involvement in several businesses, he seems to be always on the go. He’s made public his desire to answer every single email he gets. Recently, he shared that he’s backlogged several months. To me, he appears trapped in a prison of everyone else’s expectations. But there’s no doubt: Gary works hard, hustles, and is busy beyond belief.

But I just can’t help but wonder, to what end?

He has publicly admitted that his lack of sleep has contributed to an increase in feeling sick all the time. And I can’t help but wonder how much time he is actually able to give to his family with everything he has going on. With only 24 hours in a day, it seems like it would be an impossible challenge for anyone. Something has to give. I’m concerned that he will burn himself out. The stress he puts on his body could put him out of commission, which would be bad for him, his family and his myriad projects.

I realize that I’m flirting with danger here. After all, I don’t really know Gary Vaynerchuk. All I have to go by are the slices he shares online and in his speeches and book. Ultimately, his life and his choices are his business, not mine. But from an outsider’s perspective, he reminds me of many of the people in the audiences I speak to throughout the country. And so I feel obligated to question the results that may come from following the tenets that Gary proposes. Even if I am completely and utterly wrong about my perception of Gary — and believe me, I hope that I am — I still believe this is a discussion that needs to be had.

Because this post is not really about Gary Vaynerchuk. It’s about all of us.

What are we working for?

What are we really trying to accomplish?

Who are we trying to impress?

Ask anyone to name the most important thing in their life. Most would put family and relationships at the top of the list. And while it’s terribly easy to spout answers that make us sound like Ward Cleaver, it’s excruciatingly hard to look in the mirror and analyze whether or not our ACTIONS really line up with our WORDS.

In 2009, Inc. Magazine asked the CEOs of the year’s fastest-growing privately-owned companies the question, “Who is your biggest inspiration?” Kevin Burke of Centuria said this:

“My father probably — he’s a retired Fortune 500 CEO and a complete failure in the rest of his life. His mistakes motivate me to find a better path.”

I’ve shared stories with my wife Kim about business tycoons and internet celebrities who have achieved, in the words of Borat, “great success!” They enjoy varying degrees of fame, influence, and wealth. And, even though they are dizzy with exciting projects and joint ventures, they all speak about how important family time is to them. They seem to have it all together.

Kim has often suspected that their spouses might tell a different story.

When it comes down to it, the big question regarding family time and life balance is this: How important can anything be that you spend only a tiny percentage of your day (or week) on? And don’t give me the company line about your emphasis on “quality time.”

Quality time is a load of crap.

We are so quick to brag about spending “quality time” with our kids as a way to prove that we have life balance. The error is that we’re using our own definition of quality, not our kids’. The real question to ask is:

Does your kid consider your time together to be quality time?

Or is it organized activity and forced conversation squeezed into short time slots here and there?

The real world reveals the truth about quality time. A number of fathers could tell you about spending an entire day fishing with their child. You enjoy a great lunch on the boat, share some good laughs, soak in some sunshine, and even catch a few bluegill. But it’s only in the last ten minutes — as you’re turning into the driveway — when your kid finally opens up about getting bullied at school.

Your kids need quantity time out of the relationship with you. It’s not their job to be able to fit all of their stories and questions and hopes and dreams and fears into the sliver of time you’ve carved out as “quality time.”

Sometimes a meaningful interaction only takes five minutes. But sometimes you need five hours to get to that five minutes.

There are scores of people in the speaking business who are divorced or have kids that hate them. Why? They’re good people. But even though they accomplished important things and helped a lot of folks, they didn’t spend enough time on the things that mattered most. They allowed their careers to keep them on the road several hundred days a year. Ultimately, their “quality time” wasn’t enough.

The answer here is not an all-or-nothing one. I’m not suggesting that working hard is bad or that spending every waking minute with your family is the ideal. As usual, the answer lies somewhere in the middle and is difficult to find.

A mentor of mine offered some great advice early on in our relationship. He said, “Enough is as good as a feast.”

When you’re full, it doesn’t matter how many other things there are on the dessert cart. By all means, decide what’s most important to you and go out and grab it. Just don’t be afraid to let the other stuff pass by.

Success can be addicting and it’s easy to say yes to opportunities and projects that promise more of it. We can drive ourselves crazy in that pursuit, and we can drive away the people we love the most while we do it. Sometimes we need to say no to very good things in order to say yes to the best things.

I don’t know about you, but I don’t want to wake up when I’m eighty-nine with a pillow full of regrets. I need reminders from time to time to take stock of my own life to make sure the highway I find myself on is actually leading in a direction that I actually want to go.

This post is an effort to be that reminder for all of us.