Making the Most Of Once-In-A-Lifetime Experiences 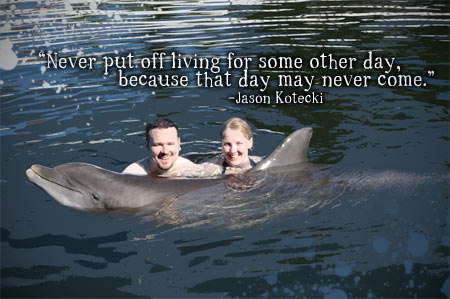 I always imagined the skin of a dolphin would feel like a wet rubber Batman suit.

I’d touched a dolphin before, at Seaworld. But only the part under the nose (the chin, I guess?). Now THAT felt like a wet rubber Batman suit. And so it was with great surprise that when Kim and I got to swim with dolphins during our trip to the Florida Keys to celebrate our tenth anniversary, the side of the dolphin did not feel as I expected. It’s hard to describe, really. There’s a texture to it. Were I not aware that I was feeling a living, breathing animal, I would have sworn it was a man-made material. Like something that should cover the dashboard in a Ford Mustang. Although I can’t quite describe how it feels, I can describe how it would sound if it were dry and I rubbed my fingernails back and forth against it: it would make a “zip zip” sound.

Not sure if that helps.

Swimming with dolphins has been on our Bucket List for a long time. After having done it, I can’t wait to do it again — maybe when Lucy’s older! — but since nothing is guaranteed and there aren’t any dolphins living in any of Madison’s four lakes, it definitely falls into a potential once-in-a-lifetime experience for us.

The whole thing happened way too fast. It didn’t help that we woke up at 4:00 that morning to take a taxi to the airport in order to catch the first of two flights and then drive two hours in our rental car before finally arriving at Theater of the Sea precisely five minutes before our scheduled check-in time at 3:30 p.m. It turned out to be much more hurried than we’d planned, but a delayed flight and lack of available rental cars have the habit of spitting on the best laid plans.

About halfway through our experience, the following thoughts bolted through my brain: Omigosh, it’s almost over! Am I enjoying it enough? Am I fully present? Am I appreciating the moment? I was worried that I came all this way and spent all this money and now it was almost over and I hadn’t really appreciated it.

It’s a tortuous question to ask oneself, because how do you judge whether or not you are sufficiently enjoying or appreciating something?

After some careful deliberation, I realized that a better question would be, “How will I remember this?” Because really, the point of being “present” is to be open to the details of an experience, which ultimately impact the richness of the memory. My biggest fear had nothing to do with not enjoying my time with the dolphins — I was — but rather having nothing but a foggy blur to remember after the experience was over.

Fortunately, I was able to do some things that served me well in this regard. Perhaps they will serve as useful tools the next time you find yourself in the middle of one of those “once-in-a-lifetime” experiences.

1.) Just Do It
Probably the most important thing to remember when it comes to making the most of once-in-a-lifetime experiences is this: take advantage of them when you have the chance. The timing is never perfect. Money is always tight. You’re never quite ready. And it’s always easier to put it off ’till next time. Newsflash: next time is never guaranteed. Like I said, I’d like to think I’ll be back for another dip with dolphins, but you just never know. Never put off living for some other day, because that day may never come.

2.) Breathe Deep
With my body still in overdrive from the day’s hurried pace, I felt like I was drowning in a sea of thoughts, with my brain gasping for air. So I decided to breathe. There is no better way to immediately halt hurriedness than with a few deep breaths. Busyness numbs your senses like novocaine, but deep breathing perks up your ability to see, hear, taste, smell and touch, allowing you to fully engage in the moment.

3.) Be Okay with Overwhelm. (Besides, You Don’t Have A Choice.)
After the breathing exercise, I began thinking more clearly. I realized that I had a lot of “firsts” going on simultaneously. Not only was it my first time swimming with dolphins, but it was my first time in the Florida Keys, my first time wearing flippers, my first time swimming in water in which I could actually see fish flitting by me. I’m no expert, but I have to think that anytime you are bombarded by the stimuli of multiple new experiences at once, it’s a little hard to feel like you’re calmly “in the moment.” If my mind felt like it was processing like crazy, it’s because it was. So I gave myself permission to feel overwhelmed by the experience. Interestingly, that helped ease my mind.

4.) Document the Experience
Although I wish I would have been more conscious of the breathing thing from the get-go, I promised myself that I would write down the things that I heard and saw and felt as quickly as possible after the experience. Even though things felt like they were going so fast, I knew my senses were firing on all cylinders and picking up details subconsciously — vibrant details that would eventually fade over time. Being able to refer back to them later would help me to relive the moment. So shortly after settling in to our hotel in Key West, that’s exactly what I did.

Here are a few thoughts I jotted down in my journal:

5. Enlist the Experts
Everybody’s favorite way to document an experience for later reminiscing is by taking photos and videos. The trick is finding the balance between capturing the experience and having the picture-taking actually become the experience.

We debated whether or not to have the on-site photographers shoot pictures and video on our behalf. I used to think it was one of those overpriced scams to get tourists to part with even more money. We even brought a disposable underwater camera to have the option of doing it ourselves. But then I realized the obvious: these guys are experts. They have professional cameras. They know when the cool stuff is going to happen, and they’re ready for it. So we decided to splurge and let them handle it, and I am so happy that we did. Suddenly the fee became a bargain, as I could focus my attention on the dolphins and not some stupid camera. I was able to more fully immerse myself in the experience and it was nice not feeling like I was going to miss a money shot while fumbling with the flash.

[UPDATE: Just watched the video for the first time, and in the intro, they included the names of the dolphins we swam with: Stormy and Duffy. Nice. Money well spent.]

These are a few of the tips I’ve tried to make the most of the once-in-a-lifetime experiences. What’s worked for you?