The school year is winding down and the weather is getting nicer. ’Tis the season for…

If you’ve ever heard me speak, read There’s An Adult in My Soup, or purchased The Kim & Jason Guide to Cheap Family Fun, you probably already know what a Pajama Run is. For the uninitiated, here’s an overview:

I’ve heard some wonderful stories about many Pajama Runs over the years, but the most epic one (so far) comes from Shelley Storhoff of Wisconsin. She is part of a group of nine families that try to get together monthly — sometimes with the kids, sometimes without — to hang out, have fun, and make memories. They organized a Pajama Run last year on the night before the last day of school. Six of the nine families were able to attend, and it was decided that the kids would be left clueless. The only instructions were to get the kids in the car and meet at Wendy’s at 11:00 p.m.

Problem averted: the fine folks at Wendy’s agreed to open the lobby just for them after hearing the situation! 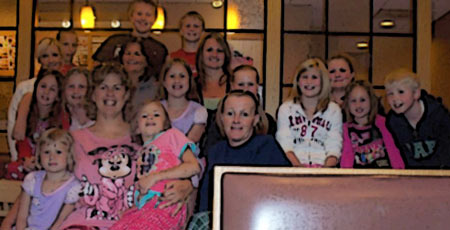 Shelley shared a number of fun memories of the evening, including:

• Giddily describing the plan to my mother – knowing that she would wholeheartedly disapprove, and knowing that I was going to go through with it anyway!

• In order to get them moving without giving up the secret plans, one mother telling her children that another family’s house was on fire and they needed help. (I’m grateful they are the family that lives closest to Wendy’s…their traumatic ride was a short one!)

• My 12-year-old later telling me that he thought we left because there was a bomb in our house…and that Dad was staying back to de-activate it.

• Telling the kids we were there for snacks…and watching some of them order full meals anyway.  (Apparently they have no troubles with an unexpected fourth meal of the day.)

• Listening — many times over in the months since — to the kids (and the moms) talking about how much fun we had.  Absolutely priceless.

Now, as exciting as that Pajama Run was, I was thrilled to get another email from Shelley telling me that they had turned their Pajama Run into an annual event. Invites were sent out via text message. They read:

This year, Shelley called Wendy’s ahead of time to share her plans. And not only did they agree to open the lobby again just for them, but they actually put an extra staff person on their schedule to better accommodate their group! The staff was excited to be apart of it. (Sometimes all you have to do is ask!) According to Shelley, whether it was their first or second time attending, everyone had a blast and laughter filled the air. There were a few significant differences, however.

Last year included 6 different families; this year there were 11!

Last year included 18 total people; this year there were 44!

Last year, no dads were there, this year 5 were in attendance! 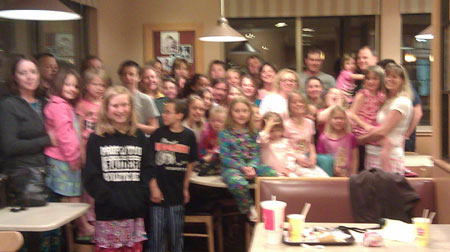 Now that’s an epic Pajama Run! Kim and I can’t wait to hear how next year’s tops it! Shelley summed up her experience with a special treat she received at the end of the night:

A special moment for me was just after midnight, when we’d all arrived at home, and I received a text from one of the moms who had been hesitant to break the rules.  It read:  “Thank you for inviting our family to the PJ Run.  We had a wonderful time despite the refusal in the beginning. LOL. I had fun coloring outside the lines.  J” I loved her choice of words in describing the experience.  So glad to have shared the experience with even more people!

Thank you for being my motivation for doing something like this with my family and friends. I can’t say thank you enough for the impact you’ve had on the way I’m trying to live my life. I feel that my kids are getting much more enjoyment out of the parent I’ve become since making a defined effort NOT to be too grown up all the time.

Of course Kim and I are always delighted to serve as reminders and share ideas with people for creating lives with less stress and more fun. But our reminders and ideas are pretty useless unless YOU decide to put them to use. Shelley and her band of merry friends did just that, and for that, they are to be applauded!

We designed The Kim & Jason Guide to Cheap Family Fun to be a resource for anyone looking for reminders to take a breath from the busyness of life and create some awesome memories with the people they love most. The Pajama Run is just one of 52 weekly videos included.

Shelley and friends took the idea and made it epic.