How to Make Fear Flinch

Ever since launching the Kim & Jason Guide to Cheap Family Fun, it has been a joy to receive some amazing feedback.

And a bit of a relief, as well.

You see, when you launch something of this magnitude, something unlike anything you’ve ever done before, there is a little voice in your head (or at least mine) that predicts that everyone will hate it and they’ll form a mob to hunt you down with torches demanding their money back.

So far, over 200 people have signed up for Cheap Family Fun and there have been no mobs, no torches, and no money given back. On the contrary, the quotes and stories we’ve heard have been truly heart-warming. Like this one from Shelley Storhoff of Wisconsin:

“Thanks for being my motivation for doing something like this with my family and friends. I can’t say thank you enough for the impact you’ve had on the way I’m trying to live my life. I feel that my kids are getting much more enjoyment out of the parent I’ve become since making a defined effort NOT to be too grown up all the time.”

And my heart absolutely melted after hearing from Timbra Vaughn about the fun her family was having. With Cheap Family Fun, you get a video a week for a year with a cheap and easy idea for having fun with your favorite people. One of the ideas is called Shooting Stars, and it includes a free downloadable template for creating your own customized paper dolls — ahem, action figures. Timbra sent me the link to her blog post showcasing their awesome creations… 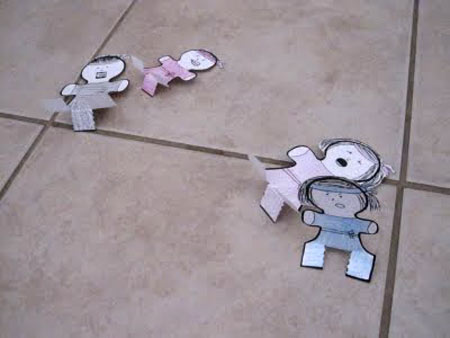 …and the highlights of her family in action:

To see pictures of a family having fun with an idea you came up with and using a template that you drew with your own hands (well, just one hand, really)…is just amazingly awesome. And totally worth all the hours it took to put it all together.

If I may, I think there are a few lessons we can all learn from this:

1) It really doesn’t cost a lot to have fun with the people you care about. Sometimes all you need is a regular reminder and an idea, which is what Cheap Family Fun is all about.

2) Ideas are great, but pretty worthless unless you act on them. Kim and I had the idea for Cheap Family Fun for a long time, but until we put in the work of coming up with all the ideas and shooting all the videos, and setting up all the back end stuff, the idea was not all that valuable. Don’t let your ideas die in your mind.

3) For anything that’s worth doing, you’ll never have complete information before you begin. When Kim and I decided to move forward on creating Cheap Family Fun, there were no guarantees that anyone would like it, let alone buy it. It could have been a complete waste of time. It’s natural to want to know if all your efforts will be worth it before you get started, but when it comes to stuff worth doing (things like launching a new business, moving across the country, or beginning a new relationship), there are no sure things. Resist paralysis of analysis.

Fear is a funny thing. It’s the schoolyard bully taking up space in your mind spouting loud, intimidating threats. Get past all the noise, though, and it’s pretty easy to beat. And you don’t even have to know how to throw a punch.

The thing that beats Fear is action.

And when the momentum builds, and good things start coming your way, you’ll wonder what you were so afraid of in the first place.