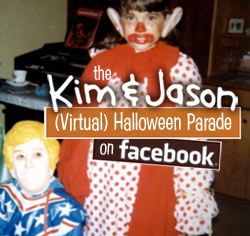 In an attempt to combine the awesomeness of the Halloween parade with the amazing connecting power of the Internets, we hosted 2nd Annual Kim & Jason Virtual Halloween Parade on our Facebook page. Picking winners this year proved to be even more difficult than last year. We received many great entries, but after much deliberation, here are our award winners:

The Cinderella Cindershmella Award
Amanda’s 6-year-old daughter Nevaeh is a big fan of the Disney princesses. But instead of trying to be Cinderella or Snow White, she decided to create her own identity and declared herself the Princess of Fall. Why not?

The Politest Werewolf Award
We love the fact that Nate grew his hair out for this role, but the whole write-up from his mom Amy was heartwarming:

This is my son, Nate. He wanted to be a werewolf, but both of us didn’t want to make him a scary one. We grew out his hair to make it shaggy, I sewed the furry mitts myself (granted, I’m not a seamstress, but my mother did teach me how to handsew a few things) onto a pair of old gloves with 40% off fabric, we found the plaid flannel at TJ Maxx, the teeth at CVS for a $1 and all the makeup came from my own kit. MAC Chocolate eye shadow is your friend! He has Asperger’s and ADHD, and has sensory issues, so the act of me even having him sit and not move to put make up on was a huge undertaking for him. But he did it and I was so proud of him. He was amazed by what I could do with what I had at home. He said, “Wow, Mom, you did so great!” He got SO many compliments from folks who said what a great costume he had. He FELT great in it. I think we both enjoyed this experience of building this costume together and enjoying the fruit of our labors. He was so happy to wear it and I was so happy to walk around with him and have our neighbors tell him what a “polite werewolf” he was.

The Best Inanimate Object Costume
Ok, so fireworks technically aren’t exactly inanimate, and this photo is a little blurry, but have YOU ever tried to photograph fireworks? There’s no doubt that this one scores HUGE on creativity.

The Best Group Costume from That One Book About That One Wizard That’s Pretty Popular
Harry looks great and Hedwig is priceless.

Costume That Makes Us Most Want To Eat Bratwurst Award
And drink beer.

Nail polish was used to create the designs on his Lederhosen. Nice touch.

Best Lighting Award
In photography, lighting is everything, and it sure added to the spookiness of this entry. And all the witchy details bring it all together. Nice execution!

Best Group Theme
We LOVE this concept. We’re curious if the tortoise was able to pull it out, as the little one clearly seems to be the underdog. But kudos to Dad for being willing to sport the giant pink rabbit costume that reminded us of A Christmas Story. We salute you, Dad.

All of our award winners will all be receiving a special “Trick or Treat” goodie box with items from the Kim & Jason Lemonade Stand. A special thanks to everyone who submitted photos — it was so fun to see everyone’s creativity on display!