Good Riddance, February (or How To Get a Taste of Your Dreams Now) 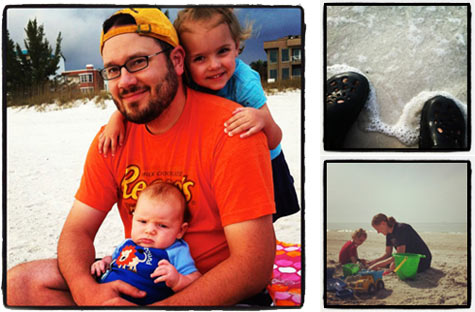 Kim and I have visited many awesome places, but so far, nothing has changed the fact that we love where we live.

Wisconsin has a lot of good things going for it, including the seasons. We love ‘em. All four of ‘em. The fresh optimism of spring that’s made even more magical by a cold winter. The summer that gets hot, but not so hot that you have to stay in air conditioned cocoons for four months. The crisp fall with a color explosion of leafy goodness that serves as the perfect backdrop for pumpkin pie and hot apple cider. And even the cold, white, quiet of winter has its high points, what with white Christmases and sledding and snowball fights. We love it all.

February is the annoying dude at a party who overstays his welcome, blathering on while completely oblivious to the fact that everyone’s gone, you’ve just cleaned your entire kitchen — including the oven — and really just want to go to bed. Yep, come February, I’m sick of snow, tired of shoveling, and want to get on with my life.

And so about a year ago, Kim and I decided it would be quite nice to live in Florida for the month of February. For although Florida makes you feel like a gooey cinnamon roll in the summer, it’s pretty sublime in February.

It started off as a crazy and very distant pipe dream.

But then we got talking.

We realized that we streamlined our business in recent years to be pretty portable. With our laptops and an internet connection, we can pretty much do our jobs anywhere. We discovered Homeaway.com, and learned that we could rent a house that would cost MUCH less than a hotel. Then we could cook our own meals, saving us from having to spend money on meals out. After some long discussions, we reminded ourselves that we didn’t have to be an all-or-nothing proposition. A month may be the dream, but we could start with a week, right? That seemed a lot more doable, especially with a two-month-old in tow. If we booked a speaking gig down there, that would cover the airfare, and any extra expenses could be justified by the fact that we prefer to spend our extra money on experiences rather than stuff or things like cable.

This definitely qualified as an experience, and fit quite nicely with our philosophy on “reverse retirement.”

So Kim sent emails to all of the speaking contacts we had in Florida. Happily, we found someone eager to bring us in, and rented a sweet little apartment in Madeira Beach, right across the street from public beach access.

We flew down, did the gig, took a side trip to Disney World for a day, and spent the rest of our week as beach bums. I made fish tacos with fresh grouper and we enjoyed oranges and strawberries and grapefruit from a local produce market.

It wasn’t a month, but it was something. Next year, we’ll try and do it again. Maybe two weeks. Who knows?

What I do know is that February was a LOT more bearable.

The idea of living in Florida during the month of February seemed like a crack pot idea when we first thought of it. Still does, in a lot of ways. But the more we talked about it, the more we realized that we could get a taste of our dream if we started small.

What’s a wild and crazy dream you’ve always had? Perhaps there is a way to get a taste of it by starting small. Maybe not every dream qualifies as a candidate to become a “dream appetizer,” but if you put on your thinking cap and get creative, you might just surprise yourself.