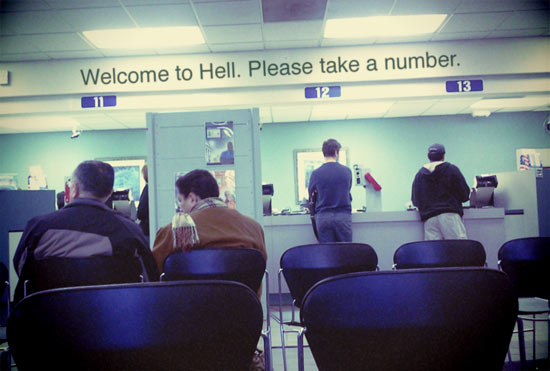 You lose your wallet. Doh!

You retrace your steps and realize that you accidentally threw it in the recycle bin. Idiot!

You discover that the trash has already been picked up for the day. You cannot be serious!

It dawns on you that you now get to spend a few hours calling banks and insurance companies followed by a trip to the DMV. Son of a…

If you’re like most people, your day becomes a shame bagel with frustration frosting and anger sprinkles on top.

Or — and this is the hard part — you could instigate a small rebellion and choose to roll with it, and maybe even have a little fun. That’s what Judy did. When on the phone, she joked with people about HOW she lost her license. And she really had fun once she got to the DMV:

It occurred to me as I was directed with my form to an area with ledges to fill out the forms, that those around me were filling out this SAME form. It was a quiet, crestfallen looking crowd. After I filled out my form, I joked, a little loudly on purpose with the guy next to me how my garbage can had stolen my wallet. He told me how he lost his. Then someone else chimed in… and another and another. This group was now all grinning and laughing. By the time my number was called, I was standing at a window next to 2 other windows that were ALL processing driver’s license replacement requests. I asked my service rep how many she processed a day and she said usually 50-80. Now the reps got to join in on the laughter that was expanding in our section.

Earlier that morning, when I first realized my wallet was accidentally taken hostage by the recycle bin, I thought it would be a bad day. In fact, it was just the source of sharing laughter and life with a group of strangers who were rotely (or sheeplishly) going about their day in mundane fashion.

In my experience, outside of getting your license for the first time, there is nothing inherently fun about going to the DMV. I’m pretty sure even the people PAID to be there dread it. But Judy proves that fun can be found anywhere, even under unpleasant circumstances.

Small rebellions are simple. They are not always easy.