The Story Behind the Golden Tickets 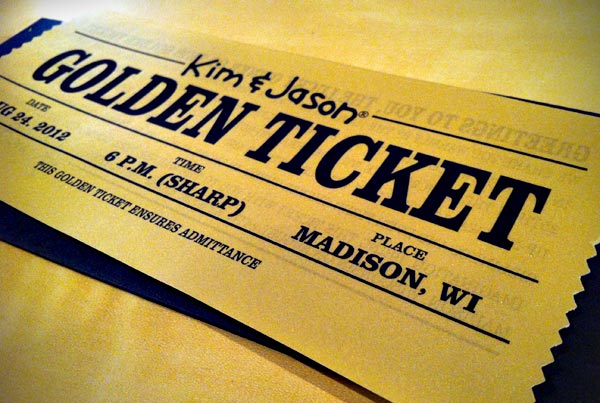 When Kim and I were in Alaska last fall, we had a lot of time to talk. (And very little time since then :) One of the things we talked about was regret. We wondered: If something happened to one of us and our time together was cut short, would there be anything we wish we would have done that we hadn’t?

The one thing that made the top of both of our lists was “The Live Event.” We’d dreamed about doing some sort of live event or conference for years. Something that brought together like-minded people, people serious about taking it straight to Adultitis. But I’d always been hampered by the belief that we’d need to have a mailing list of hundreds of thousands of people, and that we’d need to have it somewhere like Hawaii or no one would come.

But then we thought about the World Domination Summit, held in Portland Oregon, which also where Chris Guillebeau, the conference’s founder, happens to live. That gave us permission to consider our own city of Madison — a wonderful place in its own right — as a realistic location.

Meanwhile, we had been regular participants in a number of small meet-ups with speaker friends in Chicago. With 12-16 people typically in attendance, the get-togethers evolved into a unique dynamic that neither of us were accustomed to. Rather than everybody listening to one so-called “expert,” these meetings were much more dynamic and interactive. Everyone was welcome to bring up topics they wanted to discuss, and answers were uncovered by utilizing the wisdom right there in the room. To date, those sessions have been some of the most valuable and enriching events we’ve ever been a part of.

Together, in a small cabin in the middle of Alaska, Kim and I wondered if we couldn’t create something that married the two concepts. We decided we wouldn’t leave any chance for regret.

We committed to launching the Escape Adulthood Summit in 2012.

And then fear and doubt set in. Who were WE to attempt something like this? Who would even want to come? How could we pull something like this off with a three-year-old and an infant in tow? The critics in our own heads made it easy to keep putting it off. But any time we gave ourselves permission to talk at length about it, our excitement levels rose. Ultimately, we decided we had to go for it.

Adventure was calling and Alaska was our witness!

We went around and around about where we should have it, and when, and how much it might cost, and what we should charge to attend. Lots and lots of discussion. Slowly, things started to fall into place.

We found a great location that’s open and airy and NOT a hotel conference room.

We finalized an itinerary that balances whimsy and fun with relevance and practicality.

We met with a caterer to design a lunch menu that puts a gourmet spin on a childhood classic.

As the weeks have progressed, we made magic a priority. Our goal has been to create an event to be proud of, one that leaves the attendees saying, “Wow. I’ve never been a part of anything quite like this. This was awesome.” A simple question has guided us in this endeavor: “What would Willy Wonka do?” That question inspired the Golden Tickets, the centerpieces, the gift bags, the games, and all of the other big and little surprises we’ve cooked up for an event that’s now a little over a month away.

While the question was our guide, the response we’ve gotten has been our fuel. Our maximum capacity was 40 people tops. We were hoping to get at least 12, but honestly, I wasn’t sure if one person would sign up to attend. Well, we sold out in about five days, which thrilled us beyond measure. It’s been a hoot to see people share photos of themselves with their Golden Ticket on our super secret group page on Facebook. The response only strengthened our resolve to make this event even more memorable.

With our home beginning to accumulate treasures like t-shirts and mustaches (oh yes, there will be mustaches), things are getting even more real. What started out as a crazy wild hare under the glow of the Northern Lights in Fairbanks, Alaska is almost here.

The reason I’m writing all this is to remind you of something huge: You just never know. Your craziest dreams may not be as far off as you think. A decision to start, followed by one tiny step and then another, can lead you on an adventure filled with magic.

[ P.S. A few people who were originally scheduled to come have had unforeseen things come up that will prevent them from attending. While it is unfortunate for them, it’s lucky for you, as there are now a small number of tickets available, including the opportunity to bring a Partner in Crime at a discount. The deadline for sales is August 1, or while supplies last. We’d love to have you join this adventure! ]