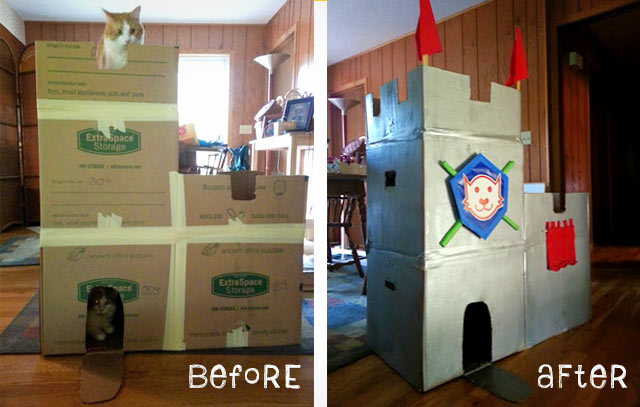 I recently wrote about the importance of being ridiculous. A few days after I posted it, I came across a photo of a cardboard cat castle lovingly (and impressively) constructed by Mindy Holahan. (You may remember Mindy as the co-host of the Nerdkicks podcast and co-originator of the Sidewalk Chalk Small Rebellion we instigated last fall.)

Let’s face it: few things are more ridiculous than building a cardboard castle for your cats.

I was curious to know the backstory behind this curious castle, as it promised to be a good one. So I asked her about it. Mindy told me that she had just moved from Philadelphia to Minnesota after ending a nine-year relationship. Although a “maker” by nature, she had little interest in creating much of anything in the six months prior to her move. There were many reasons, of course, but Mindy admitted that a big one was that she was sad that her life wasn’t turning out the way she hoped, which naturally sapped much of her creativity.

During this difficult time, Mindy’s cats provided a source of comfort for her. After unpacking everything in her new place, she had a bunch of sturdy boxes left over. Having built blanket-and-chair forts in her apartment, she was inspired to upgrade them to first class with a cardboard-fortified castle. Here’s Mindy in her own words:

“The project started as something for the cats, but as I got down to cutting apart boxes with an old pumpkin carving knife, it became a purely selfish project. I was making something again, taking the silly vision in my head and creating it out of cardboard. I went to the hardware store that night for the silver spray paint, and I was so excited that I would have painted it outside in the dark that night if my mom hadn’t pointed out the dew would ruin the cardboard. I got up two hours early the next morning so that I could get to work, and I giggled like a loon the whole time. I was happy, just so happy to be making something that ridiculous.

The shield, which I’m quite proud of, was made out of a fan from the Walker Art Center’s Cat Video Festival the week before.

Making that silly cat castle was a turning point in my year, because it unclogged the log jam of creativity for me, unleashing a wave of project starts. I didn’t even care if the cats used it (which they do, now that the paint smell is gone), I was just happy to have made something. I think the key was the silliness of the project; at the same time I was also painting and setting up my office, but that didn’t make me nearly as happy.”

Any more doubts about the power (and importance) of doing ridiculous things?

If you’re in any sort of a slump, it might be time for a Small Rebellion.

Start with something ridiculous.