It’s Always Time To Be Ridiculous 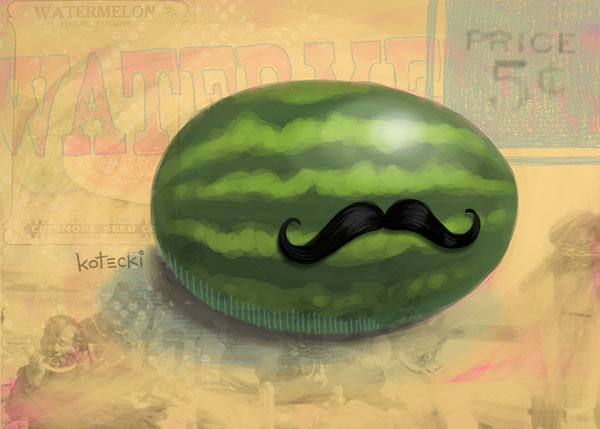 “Watermelon with Mustache” by Jason Kotecki

“The right to be ridiculous is something I hold dear.” — U2, I’ll Go Crazy If I Don’t Go Crazy Tonight

I recently became aware of a website called ridiculo.us, an online community dedicated to the encouragement, development, and execution of ridiculous ideas. Their most recent project is to fake a marathon. That’s right. On February 2nd, people all over the world (including me and Kim) are going to be taking and sharing pictures of themselves stretching, running, and finishing a marathon. They will be decked out in official race t-shirts and bib numbers. The only catch is that the race is 100% fake.

Even the most Adultitis-free among us might wonder why someone would want to fake a marathon. But maybe the real question should be, “Why not?”

Our world is aching for silliness, which is why it doesn’t surprise me that the team at Ridiculo.us blew by their goal on Kickstarter by over 2000% or that Gangnam Style became a giant hit (over 1 BILLION YouTub views and counting). Unfortunately, silliness is in short supply.

Race cars are often required to have restrictor plates installed at the intake of an engine to limit their power. Adults are expected to have restrictor plates to limit their ridiculousness, if not banish it altogether. It’s seen as a sign of maturity, intelligence, and sophistication. If you have too much ridiculousness, your taste, your smarts, and your ability to take anything seriously are all called into question.

Heaven help us if we dare to dance in the rain, make ugly cookies, or eat with strange utensils.

We are applauded for being realistic, not ridiculous.

We are supposed to fit in, not stick out. And so we make sure our clothes always match, our cars look pretty much like everyone else’s, and we paint our lives in hues of grey and beige.

Kids do not have a restrictor plate for ridiculousness. (If they did, do you think they would act or sing or dress the way they do?)

We need to be more like them, for we need more ridiculousness, not less.

Because only ridiculous people would entertain the notion of writing life-changing love letters to strangers.

Or outrageous enough to work on fixing the foster care problem in Oklahoma.

Or be preposterous enough to see to it that everyone in the whole entire world has access to clean water.

Rip off the restrictor plates. It’s time to get ridiculous.