It’s Kind of Fun to Try the Impossible 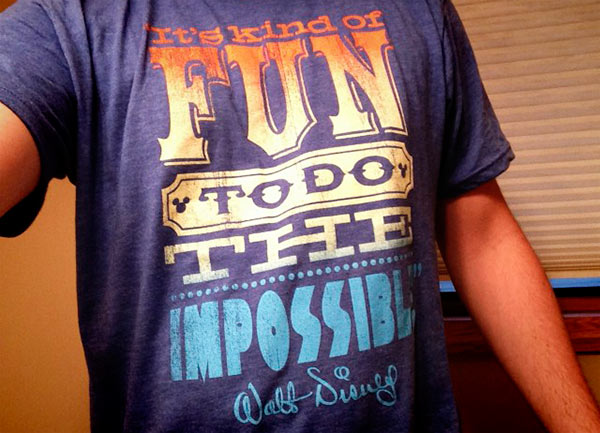 It would seem that the subject of possibility and it’s pessimistic cousin, impossibility, is shaping up to be quite the theme around here. Not only did I make art and write about it, but I just read a book about it and I’m finding that I’m living it as well.

It all started in January when Kim and I declared our intent for our business to become debt-free by the end of this year. We have a fairly sizable loan we are slowly paying back, a formidable pile of liability accumulated during our early years in which we were figuring out how to turn our passion into a real business. Alas, the real business was found but the debt remains.

Now, we pay down this loan little by little every month, and should all go according to plan, it will be absolved in the summer of 2017. Getting rid of it by the end of 2013?

And yet, as the year goes on, what once seemed unthinkable is gradually becoming inevitable.

I picked up this t-shirt at Disney World a few weeks ago. I had to have it, because even though it features a quote by Walt Disney, it had my name all over it.

This year has been a year of renewal for me. I have given myself permission to dream again. Not that I ever stopped, really. It’s just that over the years my dreams have imperceptibly gotten smaller as various failures and disappointments piled up. But this year, my dreams have gotten bigger. (Thanks Mary and Judy!) I have been getting back into the habit of not only dreaming impossible things, but trying to DO them as well.

And it turns out that even the trying is fun.

So far, this has been a most exciting year. New opportunities are springing forth. We are experiencing unprecedented growth, and we are on the verge of doing things that once seemed unfathomable. Will we achieve our goal of becoming debt free by the end of 2013? The jury is still out; I believe that we will. But even if we were to fall short, this is already shaping up to the be the most exhilarating, rewarding and fun year in business we’ve ever had.

Sure, when you try the impossible, you might not make it. You may fall woefully short. But at least you know you tried. And you might make it farther that you ever imagined.

Besides, it’s way more fun than expecting the worst, playing it safe, or settling.