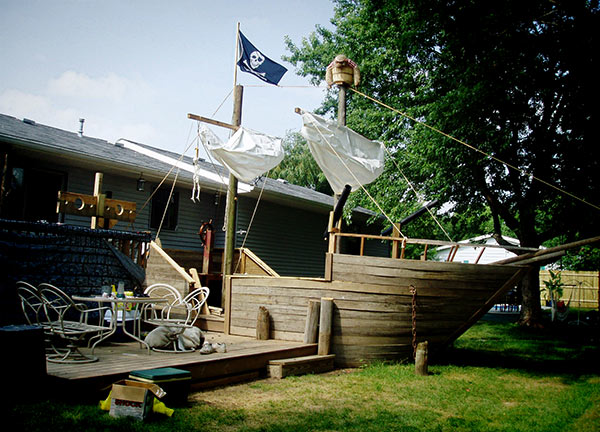 In January, I did a program for a big healthcare company and afterwards I met a guy named Randy who said he had a deck in his backyard that looked like a pirate ship.

Naturally, my curiosity was stoked. Did it come with the house? Was it seaworthy? Was talking like a pirate required for entry?

Happily for all of us, I was able to get the full story — plus pictures! Randy and his wife bought the house in 1999 and have been throwing summer theme parties ever since. (The first one was a Hawaiian style luau, complete with pork roasts wrapped in banana leaves, placed on really hot rocks, covered with a sheet, and then an entire sandbox of sand.) This year’s theme was Jaws, in honor of the 30th anniversary of its release (photo here and here.) Needless to say, it’s been a fun way for the couple to let their inner child come out to play.

The pirate ship deck emerged from one of these parties. Here’s Randy to tell the story:

One year we had a real big one and it was pirate themed. It was a perfect combination. Everybody showed up and (for a change) the weather was perfect. I worked for myself so I had lots of time to set it up. We made pirate ships out of refrigerator boxes, carpet tubes and palettes. We had 300 black water balloons for cannon balls. We also made our deck into the fortress, complete with jail (made out of 2x4s and PVC pipes painted black) and a pillory. Almost everybody dressed up as a pirate, including two people that wore Pittsburgh Pirate uniforms. (We put them in the jail as impostors.)

The party was such a success that everyone wondered how we could match it the next year. Well, I helped my neighbor tear out his deck, and the boards were really floppy, and I decided to use them to turn my entire deck into a ship. It was mostly made of old deck boards, with very little investment of money. I got the telephone pole from a friend who owned a farm and wanted it gone. The rest is semantics. 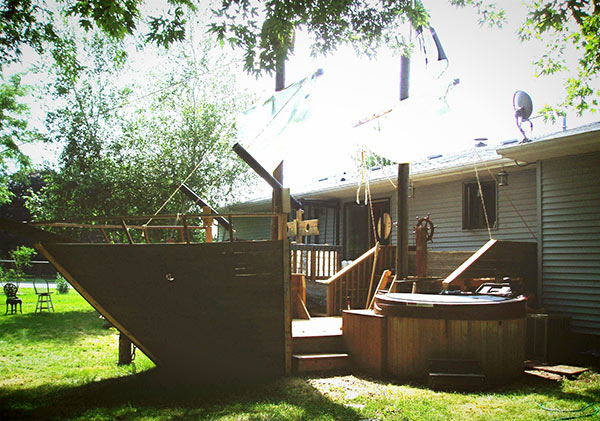 Pretty epic, huh? Just goes to show you what you can do with a little imagination, a supportive wife, and a neighbor with an old, crappy deck.

Have you or someone you know ever done any childlike home improvements? Share ’em in the comments!