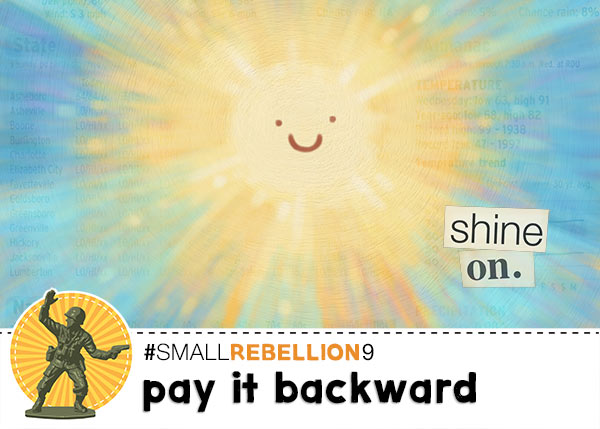 Imagine placing an order at a drive-thru restaurant. (And yes, you definitely want fries with that.) You pull up to the window and begin digging out some cash only to learn from the store employee that the person ahead of you already paid for your meal. Wouldn’t that make you feel amazing? If you were having a bad day up until that point, what are the odds that your mood changes?

This concept is known as “paying it backward.” It’s similar to “paying it forward,” which is the expression for describing when the beneficiary of a good deed repays it to someone else instead of the original benefactor. Paying it forward is a reaction to something that’s already happened. Paying it backward is starting the action in the first place.

And it’s definitely a small rebellion.

Your mission: pay it backward sometime this week by picking up the tab of the person directly behind you in line. It could be at a drive-thru window, a tollbooth, a vending machine, a movie theater, or at the donut shop. If you are in a situation in which you don’t know what the person behind you is going to order (say, for instance, at Starbucks), just leave an extra $5 behind.

The real magic happens when you’re already gone before the person realizes what happens and has a chance to thank you. Although it’s nice to be thanked, this feels better. It’s like getting an extra fry in your bag.

As a bonus, this is an amazingly effective way of dealing with someone who has a bad case of Adultitis. Check out this story from a woman named Kayla:

“I once pulled through into a very packed McDonald’s — the kind that has two lanes. It was very slow going and the man behind me, for some reason, was getting so frustrated with me. He was yelling and visibly irritated with the situation. I was so tempted to get mad and yell back at him that he needed to just calm down, but instead, I decided to ‘kill him with kindness’ and pay for his meal.

“When he pulled up to the window and found out I paid for him, he was caught completely off guard and I saw a change in his demeanor as he yelled ‘thank you’ to me while I was pulling away,” Kayla said. “We have two options of how to handle negative people. We can either stoop to their level, or we can bring them up to ours.”

Watch out, Adultitis. A little spare change can change everything.