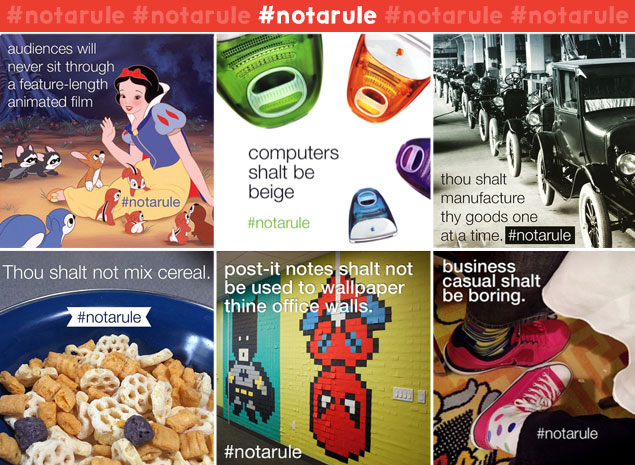 The rules that don’t exist are holding us back from untold opportunities and a life of awesome. It’s one thing to encourage you to question everything. It’s another thing to actually do it, because we’re creatures of habit. These rules are so ingrained within us that we don’t even stop to consider an alternative. In hindsight, the successful choices great rule breakers of the past made seem obvious. Building an amusement park that is safe, clean, and enjoyable for both children and adults is a no-brainer now. So why didn’t anyone do it before Walt Disney?

So, how do you get good at noticing the rules? Here are five ways that help:

1) Start a Practice Project.
I recently started an ongoing project called #notarule. Every day, I post a rule that doesn’t exist. Sometimes they are rules my family has broken. Sometimes they’re rules I’ve noticed someone else break. After a few weeks of posting regularly, other people started sending me rules. As the project has unfolded, I’ve gotten a lot better at noticing rules that don’t exist. Turns out it’s a skill that can be developed with a little practice. Start flexing your rule breaking muscles by starting a personal journal, with the challenge of listing one #notarule each day.

2) Exploit Inexperience.
The rules that don’t exist have woven themselves into the tapestry of our lives, making it nearly impossible to consider doing anything differently. However, new eyes are not handicapped by this. Take advantage of new hires or friends who are inexperienced with a problem you’re having. Ask them for advice. Implore them to ask “why?” and “why not?” a lot. When they ask these questions, take time to answer them. If you can’t remember the reason, or if the reason is irrelevant, outdated, or stupid, you’ve just struck oil and discovered a rule that doesn’t exist!

3) Hero Worship.
I am a fan of Hugh MacLeod, who is well-known for drawing cartoons on the back of business cards. He broke the rule “Thou shalt make thine art upon traditional surfaces.” It reminds me that art can come in many shapes and sizes, and that sometimes the most unusual forms are the most effective at getting noticed. Who are your heroes? If they experienced any measure of success, you can bet they broke at least a few rules that didn’t exist. Analyze what they were and see if there are any lessons you can learn.

4) Become a Thief.
Constantly comparing ourselves to others leads to a life of despair. To be truly innovative, one must look outside one’s immediate sphere of influence. Peanuts creator Charles Schulz looked for ideas at bookstores by roaming the sections he rarely visited. Expose yourself to new music, magazines, movies, restaurants, activities, and people you wouldn’t normally experience. This will provide you with a fresh perspective and might reveal some rules you might be unknowingly living by. Ask yourself, “Is there anything I can ‘steal’ and adapt in my own life?” (Hint: the answer is yes.)

5) Simon Says Who.
How do other people in your situation do things? What are the things you feel other managers/moms/dads/husbands/wives/friends/people in your position are supposed to do? What are the absolute givens? Make a list of at least 50 of them. It may be difficult, but don’t stop until you get to 50, because there are at least that many. Once you’ve completed your list, for each one, ask, “Really? Says who?” If the answer is “the IRS,” or “The Constitution,” feel free to move on to the next one. But challenge yourself to see if there are any opportunities in going the opposite direction. Ask, “what if I did ______ instead?”

Life gets better when we start ignoring the rules that don’t exist. But we have to notice them first.