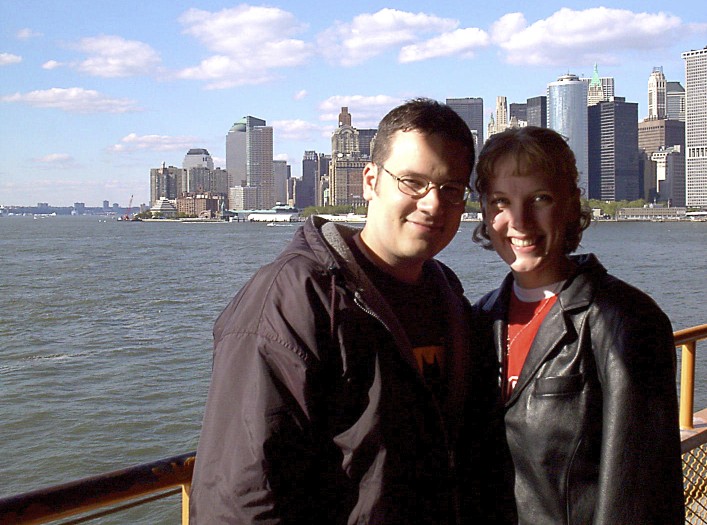 The picture above is from 2002, eight months after 9/11. I was focused on my comic strip back then and was three years away from the start of my speaking career. We were in New York City for the first time to walk the National Stationery Show. While there, we met a licensing agent who agreed to represent my Kim & Jason artwork. It was so exciting, and it felt like such a big break. It amounted to a handful of small deals, mostly overseas (I think they made some sort of photo album in Japan), but it didn’t really make the dent we’d hoped for.

That was thirteen years ago.

Since then, there have been many little breaks that felt like they might have been bigger. For several years, we flirted with bankruptcy as we scraped and clawed our way to a business model that could sustain itself. There were many tear-filled nights when we wondered if we were crazy. And there was that two-day craft show in which we sold a grand total of four greeting cards for a whopping sum of $7.92 (after which we drained our profit and drowned our sorrows with a $35 meal at Outback.)

Time and time again, we’ve encountered numerous opportunities that seemed like the “big break” we were waiting for. Some crashed and burned into a heap of soldering failure. Many, although falling fall short of our vivid imaginations, blossomed into a sturdy enough bridge that kept us moving forward.

Through it all, Kim and I developed some tough skin. Some might say jaded. But you can only have your high hopes dashed so many times before you start protecting yourself by downgrading your dreams.

And this is why, before this moment, we haven’t told many people about our dream of this book — the one coming out a week from Tuesday — becoming a New York Times bestseller. Because we’ve been down this road before. It’s embarrassing to put your dream out there and have it not come true with everyone watching. It’s easier to not get your hopes up.

But my friend, who experienced years of frustration and heartache before finally adopting her two kids, recently told Kim, “It hurts the same whether you get your hopes up or not.”

So yes, I do want this book to become a bestseller.

Not so I can be rich and famous, but so that this message — the message we’ve risked everything for — can finally reach the audience it deserves. We don’t have the money for a fancy publicist, we aren’t connected to A-list bloggers, and our tribe is relatively small.

But it IS a tribe that cares. The heartfelt emails, encouraging comments, and warm hugs have sustained us over the years, giving us the confidence that were were on the right track.

Truly, we wouldn’t be here without you.

If there is any chance of making “The List” it will require no small amount of help from you. Without getting into specifics and making this long post even longer, the formula for getting on it is a lot like voodoo. It doesn’t actually measure the true number of books sold, and some argue it is crooked and unfair. A lot depends on who else releases a book the same time, but we were told that selling 5,000 copies in one week gives us a reasonable shot of making it. The good news is that although all numbers reset back to zero each week, pre-orders for a book all count toward the first week’s sales.

Right now, we are at about 3,000. Honestly, that seems as tantalizingly close as it does to a million miles away. Especially since even getting to 5,000 doesn’t bring any guarantees.

But I know I would regret not sharing this dream and these numbers with you. We have to try, even if it is scary going public like this.

If you’ve read this far, you may be wondering how you can help. Here are a few:

1) Obviously, buying the book is a big one, and the more the better. You may have already done this, but if not, now is the time. For a few more days, we still have our packages online for 5, 10, 25, and 100 books. Lots of people are buying multiple copies to use as gifts for friends, clients, customers, or employees.

2) Support our Thunderclap campaign by saying “yes” to posting a one-time message about the book on Facebook or Twitter. It’s free and easy, but will create a powerful wave of attention on launch day. Here’s the link: https://www.thunderclap.it/projects/27704-help-marty-fly

3) Please leave an honest review on Amazon.com or Goodreads when you you finally get the book in your hands. It is HUGE for social proof.

4) Finally, just share this book and the message with people you think need to hear about it, whether it’s your boss, the president of an association you belong to, or the neighbor down the street. Blog posts, newsletters, Facebook updates and tweets are all appreciated. Here’s a link to some handy tools and graphics to help you out.

In closing, I just want to thank you for the support. I feel like all I am doing is asking all the time, and I can’t wait for the dust to settle down so I can just go back to giving.

I made the comment about not wanting to be “rich and famous” earlier. The truth is, I already feel like the richest guy in the world and I know that I am loved, which is better than fame any day.

Thanks for fueling me and Kim with your words and deeds.

Now let’s go give Adultitis everything we’ve got.