Today I wanted to start by sharing something that has the potential to scare off half my readers who aren’t already aware of this little fact: I am Catholic.

I can promise you that am not interested in converting anyone to anything, and there will not be a sales pitch for cleaning products at the end. I just wanted to share where I’m coming from and relay a neat story. However, please be advised that the Internet is a big place and you’re free to surf elsewhere if you are uncomfortable hearing viewpoints that may be different from your own.

Whether it be good, bad, or ugly, it is impossible to not have a opinion of the Catholic Church. I certainly have had my share over the years, with many being in the bad or ugly category. Most of the issues I have (and I suspect I am not alone) are with the actual PEOPLE in the Church. They can be idiots. Stubborn, misguided, hypocritical idiots.

Then again, so can I. And so too were all twelve of Jesus’ best friends, at times.

But I like to think we are blessed idiots. Every last one of us, Catholic or not.

I have long been a fan of the rich history and beautiful traditions of the Church, especially after I have taken the time to push past the stereotypes and learn about the origins and meanings behind them. In the last few years, I’ve developed a particular fondness for Mary. 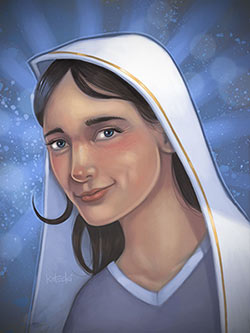 Lots of people think Catholics worship Mary. We actually don’t. (We “venerate,” which is different.) But there is no doubt, we do love us some Mary. Just like Jesus did. Because she is the best human example of what it truly means to love God. And also, JESUS’ MOM. We often ask for her support in our prayers because Jesus has a habit of listening to her.

Again, blessed idiots have a way of using big words like “venerate,” and otherwise complicating something that is not that complicated: Mary is one heck of a role model and someone I like having on my team.

A few years ago, two friends introduced Kim and I to a book called “33 Days to Morning Glory.” The subtitle is “A Do-It-Yourself Retreat in Preparation for Marian Consecration.” At first I was skeptical. Marian Consecration?! Will this involve altars and the bloodshed of young goats?

Unfortunately, it did not. It is, however, an invitation to to basically declare, “Ok Mary. I officially want you to be on my team. I want you to help me be more like Jesus. Let’s do something awesome together.”

So Kim and I went through the book with our friends. And on my 37th birthday, I consecrated myself to Mary. Again, there were no swords, giant stone altars, or goblets filled with blood. Sadly.

Then interesting things started to happen. Exactly two months later, we discovered Kim was pregnant with our third child. Although it was unplanned and unexpected, it was NOT an immaculate conception. I’m pretty sure I was there for the magical moment, but I may have blacked out for part of it.

In May, a book agent came out of nowhere and asked (it sounds weird to say begged, but Michelle would probably use that word) if she could represent me. After meeting with her and discovering what a good chemistry we had, I said yes. And thus began the journey to signing our first book deal with a major New York publisher. A year later, also in May, was when we officially secured a deal with St. Martin’s Press to bring Penguins Can’t Fly to the world.

Now in the Catholic Church, May is considered the official month of Mary. You know, like how States have official State birds and flowers and stuff? So Mary has her own month. And just like the wood violet is the official state flower of Wisconsin, the rose is the official flower of Mary.

So get this: We finalized the book deal in May, after connecting with the book agent the previous May. And the editor at St. Martin’s who I’d be working with was named…Rose.

Meanwhile, our daughter was born a few days before Christmas in 2013, and we named her Virginia Rose, the first names of our paternal grandmothers, and two names with links to the virgin Mary.

Shortly after we signed the book deal, Kim and I decided we officially wanted to shoot for the New York Times Bestseller list. (Although no one knows exactly HOW books are selected for The List, as they are not based solely on actual sales numbers, there are a lot of different strategies you need to employ to give yourself a shot, all of which usually mean you will make less money that you would otherwise.) We were driving home to see our dads for Father’s Day, and we made the deciscion. We both knew there was no way we could do it on our own, so we turned to someone we thought could help. I decided to dedicate the book to Mary (if you have it, you now know which Mary I was referring to on the dedication page). Starting on Father’s Day in 2014, we have each said a Rosary every single day, asking Mary to help us in this quest.

For those of you unaware, the Rosary is a series of prayers said by old ladies.

But seriously, I had previously not been a big fan of saying the Rosary, mostly because it is so rote and rigid. After all, I’m an artist, man; I like things that are new and fresh and different. Routine can be so…boring. But it was a perfect way to show I was serious about this, because it was a sacrifice. There were many days when I put it off and put it off, and at the end of the night, something that would normally take less than 15 minutes took about an hour because I kept drifting off to sleep mid-Hail Mary.

Brutal. Over the year, however, I began to appreciate its meditative qualities, and look forward to those quiet times apart from the crazy busyness of daily life. And along the way, there were lots of signs — many being very personal — that seemed to indicate that Mary and her son were indeed at work.

I made connections with people who endorsed and helped promote the book that I never would have had contact with otherwise. Pre-orders were so good that St. Martin’s Press had to order a second print run of the book BEFORE it even launched. Barnes & Noble currently has orders in for book that they can’t get fulfilled. We just got word that the confirmed sell-through rate of the initial print run is 75%. (Sell-through is the number of books printed that are actually sold.) My editor told us that the average sell-through rate for most books — for their entire lifetime on shelves — is 60%. The remaining 40% is typically returned and destroyed. There usually is no second print run.

Now when it comes to bestseller lists, all of the weeks or months of pre-orders count for the first week. We knew all along, that this would be our best shot. Leading up to launch week, things were going so well, we had a good chance. Plus, we had Mary on our side.

Last night, we learned that we didn’t make it.

It would appear that this is where the story ends. We failed. Mary let us down. Our faith is a sham.

I’m guessing you’ve had at least one experience in your life where you prayed and prayed for something. Maybe you were even confident your prayer would be answered. But in the end, the thing you hoped would come to pass doesn’t. It just…doesn’t.

The question is, what do you do then? Do you turn angry and bitter, shaking your fists at God? That’s a common response, and certainly understandable. Make no mistake: I am sad and disappointed. But I also believe that real faith is the substance of things hoped for, the evidence of things not seen.

There have already been numerous accounts of people whom, upon receiving the book, immediately turn around and order multiple copies to give to others. We have always pegged this book as one you recommend to people, and although we narrowly missed the big lists in our launch week, there are indicators that this book has the makings of a perennial bestseller.

And so, call me delusional, but I don’t see this as an end. I see it as a “to be continued.”

If you don’t have a few “to be continued” moments in your story, where the outcome is uncertain, you are not stretching yourself enough and your dreams are too small.

A story where Frodo gets a ring, lollygags through fields of daisies and tulips, and saves the world by easily destroying said ring in the fires from whence it was forged, would be a very boring story. Completely lacking in sequel potential, to be sure.

Kim and I, we’ve been at this too long, and have too many UNanswered prayers for which we are already immensely grateful, to not believe that God doesn’t have something even greater planned. We believe Mary is still working on our behalf, even though we can’t always see the evidence with our own eyes. Because that’s what Faith is all about, Charlie Brown.

Faith is Indiana Jones, stepping out into nothingness, onto an invisible bridge that doesn’t appear to exist.

No, this isn’t the end. The momentum for this book is only beginning to build.

I don’t know what’s next. But I know it’s just about to get good.

P.S. Of course, there are a TON of people to thank for the early success of this book. If you have purchased a book, or many copies of the book, or have done anything to spread the word about it with your friends, families, and sworn enemies, THANK YOU. Thank you for being a part of this story.