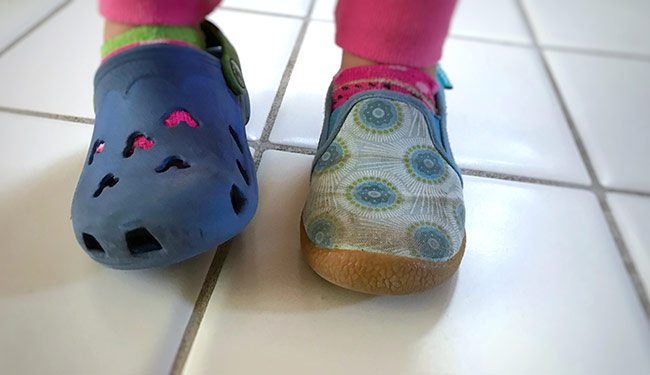 At three years old going on twenty-two with pink hair and arms wrapped in tattoos, my daughter Virginia keeps us on our toes.

A few weeks ago, she decided she wanted to wear two different shoes. To church.

To her credit, they were both blue.

The logic was sound. She dug one shoe out of the closet, but failed to find the match, so she grabbed another nearby shoe and put that on. Problem solved.

Kim and I appraised the situation and looked at each other. Ginny appeared determined. A fight to conform to a more standard footwear choice would likely ensue. Not that we’re pushovers, but we both paused to consider whether this was a fight worth picking.

Then it occurred to me that literally the ONLY reason we’d push the envelope is because of concern about what other people would think of our parenting.

After all, what kind of incompetence is required to allow your child to show up in church wearing two different shoes? Are we clueless? Careless? Mentally ill? Lacking any sense of control over our kid? Without any regard for society’s rules of fashion etiquette?

Maybe we are serious about letting our kids be themselves. Maybe we are confident enough in our parenting that we don’t need to fear the judgement of other people who don’t know the whole story. Maybe we’re getting better at identifying rules that don’t exist.

Maybe it’s a little bit of all of it.

It might sound like I’m bragging about my mad parenting skills. (While others might think I’ve simply gone mad!) But keep in mind I’m the same guy who until quite recently was afraid to buy and wear red shoes (that both matched) for fear of what other people might think. Rather, this blue shoes incident is the result of a long time spent practicing identifying and breaking rules that don’t exist, slowly realizing that not only did the sky not fall, but my confidence grew and my life got better.

Most of us routinely do things to influence the actions of others because of how they might reflect upon us.

You can fill in those blanks however you’d like, but what if the answer to any of those questions was simply, “a good one”?

Maybe the people who look up to us need us to be a little bit more willing to sidestep the norms in order to help them thrive.

I am not talking about letting yourself be a pushover.

I’m talking about considering the possibility that the way everybody else does things isn’t necessarily the only or even the best way.