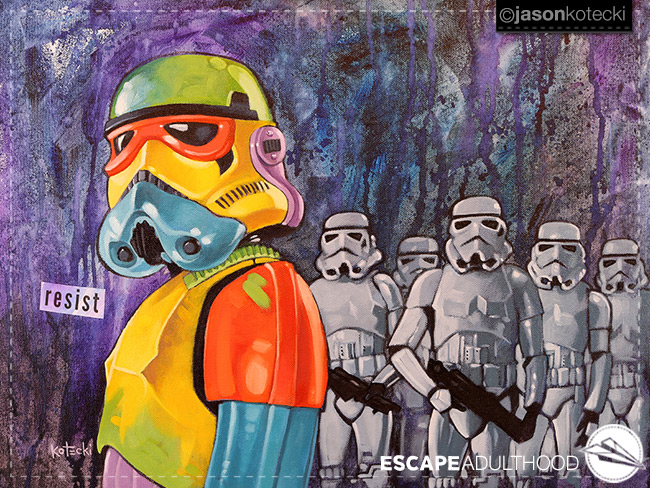 Some people may assume this piece was created as some sort of a political statement. Nope.

Its message is much larger than that.

We grow up learning how to fit in, follow rules, and conform. Conformity is the goal governments have for their citizens, factories have for their workers, and teachers have for their students. It gets you to follow the law, do the job, and fill in the little ovals on standardized tests. All without asking too many questions (or ideally, none).

Unfortunately, in our current world, governments have gotten too big for their own good, factories are closing down, and a diploma is less valuable than it’s ever been.

Conformity is a very good thing for governments, corporations, and schools. But not so much for you. As adults, conformity might deliver a small measure of security. But it can come at the cost of unfulfilled potential and a boring life.

You were not made to blend into a faceless army of automatons, following rules that are only there because no one has bothered to point out their uselessness. You were created to be something special, unlike anyone else who has or will ever live. You are called to stand out and shine like the stars.

When you feel the pull to hide that delightfully weird, remarkably quirky side of you from the world, there’s only one thing to do.