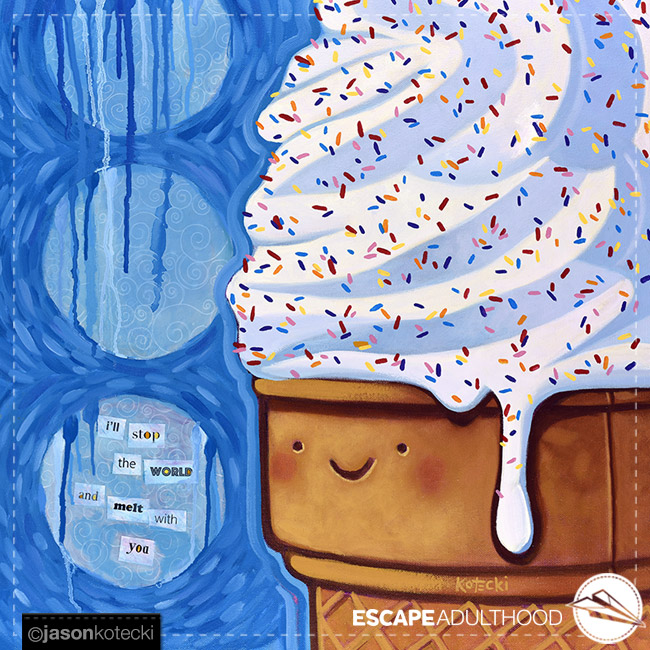 “Melt With You” by Jason Kotecki. Oil on canvas.
Original and Prints available here.

This painting was inspired by the lyric of a catchy tune from the 80s by a band named Modern English. Most listeners may not realize that this seemingly simple upbeat love song is actually about the end of the world. Lead singer Robbie Grey, who wrote the song with his four bandmates explained, “I don’t think many people realized it was about a couple making love as the bomb dropped. As they made love, they become one and melt together.”

On to another fun fact: This was the very first canvas I painted live during the first ever Madison Night Market. It was also the first time I had my art for sale to an audience that hadn’t just heard me speak. Previously, I’d only sold my art at my speaking engagements, after spending an hour sharing my art on a big screen and telling stories to a captive audience. But here, my art would be standing on its own. No explanation. No context.

As I painted away on my little ice cream cone, I was able to hear people’s reaction to the painting and the prints we had for sale. And what I heard was magic. People smiled, and laughed, and pulled their friends over to take a look.

Quite simply, my art made people happy. And that made me feel awesome. I came to the conclusion right then and there, that if that’s all I was ever able to accomplish, it was a worthy calling and it would be enough.

This is kind of a big deal, because you see, in the “Art World,” it’s not enough. An artist is supposed to make a political statement, disturb people, or at least question everything they hold true. Which is fine, as far as it goes. But putting good into the world, making someone happy, and bringing a small measure of joy to a fellow human being is pretty good, too.

Which brings me back to this song about apocalyptic hanky panky.

It seems that every generation fears it’s living in the last days. And so far, every one has been wrong. (It remains to be seen how this one fares.) While we wait and see if the world is going to end, let’s do something productive with our time. Rioting in the streets, cowering in fear in front of our TVs, and ranting on Facebook don’t seem like good options to me.

Instead, what’s ONE thing can you do today to make someone’s day just a little teeny bit brighter? How can you use one of your gifts to make someone happy?

Regardless of when the world ends, we all have a last day coming. I can’t say for certain that I’ll spend it in the fashion described in the aforementioned 80s song.

But if I can make someone happy on mine (and as many of the days in between now and then), I’m good with that. How about you?