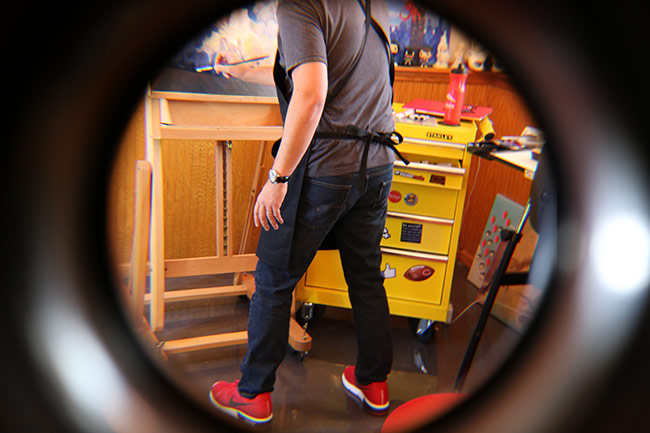 New Year’s resolutions are okay, but I like tinkering better.

A resolution feels like a stern, rigid taskmaster who shames you when you fall down. But tinkering is a curious friend, nudging you into new adventures in which you uncover things you didn’t know about yourself.

With a resolution we say, “I’m going to immediately change forever.”

When we tinker, we say, “I wonder what would happen if I tried this for a little bit…”

Instead of committing to a resolution, I recommend starting a Tinker Project.

A Tinker Project as a playful endeavor of any size or scope that gives you permission to experiment with something that’s been tugging at your soul, without regard to any particular outcome. It’s a chance to chase your curiosity and try something new. It’s about venturing into the unknown, just because, where the act of exploration is reward enough.

A Tinker Project is meant to be pretty flexible. It could be a year long, or just a few days. You could use it to accomplish 365 things, or just try 3. In 2016, I took on a pretty intensive Tinker Project. My goal, after going too many years in a row wishing I’d spent more time in my studio making art, was to create 100 new pieces. It turned out to be quite a challenge, but I’m happy to report that I did it. In retrospect, I probably bit off more than I could chew, but I think it’s what I needed at the time.

Here are a few things I learned in that process.

Work backwards.
I didn’t pull the number 100 out of thin air. I did some math to determine the feasibility. I knew that at my current rate of production, I could probably get 2 new pieces done in a full day, and I’d be able to hit my goal if I set aside one full studio day a week. 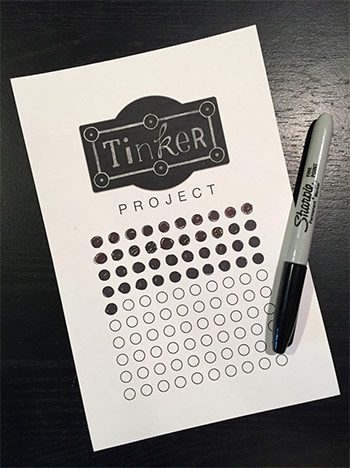 Make a visual scoreboard.
I created a simple scoreboard, with 100 circles. Each time I finished a new piece, I filled in a circle. This gave me a quick visual snapshot of how I was doing and kept me accountable.

Get support.
It helps to have someone cheering you on. In my case, I got emails throughout the year from readers who were curious how it was going. The biggest thing for me was that my wife was on board, which was very important, because she has a lot of control over my schedule! But also, it was easy for me to convince myself that it was frivolous, compared to the activities that were more tangibly revenue producers. She believed in the importance of this project for my long-term growth. That helped a lot!

Talk about it publicly. Or not.
This is tricky. Some people will argue that when you tell someone you’re training for a marathon, all the praise you get for sharing your intent satisfies you so much that you don’t even need to follow through on it, because you already got the “win.” However, it is also true that sharing your intent publicly will cause people to ask you about your progress, and that can keep you accountable because you don’t want to look like a loser. I’d say figure out what category you’re most likely to fall into and proceed accordingly.

Be flexible with your schedule.
In order to accomplish my goal, I know I needed to carve out the time to do it. So I set aside one day per week as Studio Day. Because my schedule is so fluid, there were many times an opportunity arose or request to speak conflicted with a studio day. At those times, I followed the mantra, “If you erase, you must replace.” If something else comes up, you have to move it somewhere else.

Be flexible with yourself.
Somewhere during the course of the year, I decided to take up oil painting. Which was great for my growth as an artist, but terrible for my original calculations on how long things would take. Oil painting is much more time intensive than the work I’d been doing digitally. I stubbornly refused to adjust my 100 goal, which definitely added extra stress towards the end of the year. This was probably a Tinker Project fail, but alas, my stubbornness is my greatest strength and my greatest weakness.

Beware The Resistance.
Stephen Pressfield talks about this in his amazing book, The War of Art, which I read once a year. The Resistance — a first cousin to Adultitis — will be your biggest obstacle, and it will come in many forms. The more important something is to our soul, the more Resistance shows up. I noticed it in how my morning routine would subtly push into the rest of my day, as I tried to get “just one more thing done” before I got started on the art making. Before I knew it, two hours of my studio day was frittered away on busy work. Sneaky bastard.

The only studio day I missed all year was when I was on vacation. I couldn’t control how long pieces would take or whether or not any of them would be any good. But I could control planting my butt in the studio and doing the work. And that’s all you can do. That’s the part you have to be ruthless about. You have to be willing to go through the motions and put out crap. From this willingness to suck is where the magic happens. It’s what separates the pro from the amateur. The amateur makes excuses and waits for inspiration. The pro makes a commitment and waits for nothing.

Final Thoughts
In the end, many of the fruits I enjoyed in 2017 came out of my Tinker Project in 2016, including our involvement with the Madison Night Market, my foray into live painting, and the first ever Wondernite (all of which were Tinker Projects in their own right). Although I completed what I set out to do, it was probably on the more extreme side of what a Tinker Project should be.

At its heart, it should be a fun, low pressure experiment. It should be permission to move forward into something that’s been pulling at your heart, without having to know the reason why.

My heart knew I needed to spend more time in the studio, but my head didn’t know why. Turns out that all the cool things that happened in 2017 are examples of some of the “whys” that materialized, but there was no way I could have known them when I started.

Oftentimes, a New Year’s resolution is the response of your head using logic to call the shots: I should lose weight, eat healthier food, save more money.

A Tinker Project is about trusting that sometimes, your heart has reasons for doing things that take awhile for your head to understand.