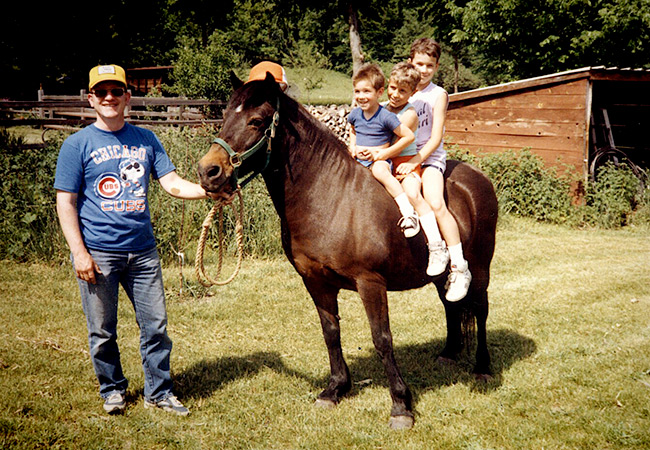 My dad used to work at a lumberyard. He would bring estimating projects home and work on them at night at the dining room table. The overtime pay he earned helped my parents pay ahead on their mortgage. I’m sure there were about a million other things he would have rather been doing, but he spent many evenings at that dining room table, after long days at work, earning a little bit extra.

I will never forget the little watch he kept close at hand, logging his hours. If one of his sons wandered into the dining room, hoping to chat, he’d stop what he was doing, turn off the timer on his watch, and become completely attentive to the person in front of him. Not once did he ever shoo us away or urge us to wrap it up so he could get back to his work.

I remember one of those dining room chats with my dad when I was a teenager. Things were not going well at all with a girl I was infatuated with. I was sure she was “the one,” and yet my efforts to win her over had been unsuccessful and appeared hopeless. I needed a different tack; something guaranteed to work.

Instead, my father suggested that perhaps there was some “Girl X” out there waiting for me, someone I hadn’t even met yet. I rolled my eyes at his cluelessness and misplaced optimism. Clearly he didn’t know how right I and this other girl were for each other.

It was only a few months later that I met Kim.

My father has a way with words and a homespun philosophy that’s purely his, but there’s a lot of wisdom snuck inside. It helped get me through some tough times and shaped my path into manhood. But it wouldn’t have done me any good had he not made himself so readily available, or made me feel that he didn’t have the time.

A few years into our business, Kim and I were in a rough spot. We had accumulated quite a bit of debt trying to figure things out, and were at the beginning stages of a business model that was finally working. But we were out of money. My parents refinanced their home in order to help us consolidate our debt, get our head above water, and survive. I’m sure we wouldn’t be here if not for their generosity, and the day we paid off that loan was one of the best of my life.

The thing is, my parents would have never been in the position to help us in that way were it not for those late nights of my dad collecting overtime at the kitchen table.

The actions of my parents always made it clear what was first on their list of priorities. I’ve tried to imitate them. It’s an everyday challenge. As I was literally typing this, my son came into my office to show me his newest Lego creation. What else could I do but stop and appreciate his handiwork?

If there’s one thing I’ve learned as our business has matured and our kids have grown and our lives have gotten fuller, it’s that saying “family first” is easy. Living like you mean it is really hard.

Pretty much everyone says that their relationships are the most important part of their lives. The problem is, because that assumption is practically automatic, it’s easy to fall into the trap that maintaining those relationships is automatic as well.

It’s normal to find ourselves running around like a chicken with its head cut off, striving to advance at work and make our mark on the world, garnering praise, money, and accolades, all the while espousing that family comes first.

But how can we prove it? Words are cheap. Our actions are the only way to know for sure.

I’m not here to suggest that there’s a perfect ratio of how much time you need to put in, or how you should show your support. I just find it’s helpful to step back every once in a while to examine our auto-pilot setting, making sure our intentions and our actions line up with the things we say out loud.

You can say “family first” as many times as you’d like. You might be able to fool most people.

But in the end, actions are truth. If they don’t back up your words, the real fool might be you.