I recently posed the question: Are you in your dream job? A few people responded that they were, but I imagine most people fall into the majority of people — 80% according to a Careerbuilder.com survey — are still looking for their dream job. People give many reasons why they are not in their dream job: lack of skills, lack of opportunity, too young, too old… the list goes on and on. Is it too idealistic to expect that everyone could have a job they love? A public speaking and presentation skills coach named Lisa added a comment to the previously mentioned post, saying:

I am definitely in my dream job, and I created it myself, which is the best kind!

I was accused once of being an elitist for saying that everyone should have a job they love. For people who have language barriers, disabilities, lack of skills, etc., it might be hard to get those dream jobs, because they have fewer opportunities available to them. 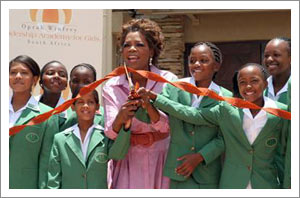 Wow. Maybe I’m in the minority here, but if somebody believes that someone else can’t be in a job they love because they have language barriers, disabilities, or lack of skills…well, I’d say that person is an elitist! Here’s the cold hard truth: most people are not in jobs they love because of choices they have made or have failed to make. I’m not saying they were easy choices, but they were choices nevertheless. It’s convenient to throw up excuses to serve as insurmountable barriers as a way to comfort ourselves, giving us the illusion that control of our own lives is out of our hands. Forgive my French, but that’s a load of hooey.

I was watching a morning news show the other day, and they were running down the top ten list of wealthiest women in entertainment. Oprah Winfrey was the queen of the mountain, easily outdistancing Martha Stewart. I believe they said Oprah was worth about 1.5 billion dollars. (That’s billion with a “b.”)

How dare Oprah Winfrey achieve such success? The nerve of her! Didn’t she realize that she:

I can’t imagine someone having more obstacles to success, but somehow, Oprah has been able to host the highest rated television show in history, become an influential book critic, an Academy Award-nominated actress, and a magazine publisher. She has been ranked the richest African American of the 20th century, the most philanthropic African American of all time, and the world’s only black billionaire for three straight years. She is also, according to several assessments, the most influential woman in the world. (Source: Wikipedia.org)

How did Oprah do it? She realized that in most cases, the only obstacle to a life you’ve always dreamed of is…you. I think she says it best:

It doesn’t matter who you are, where you come from. The ability to triumph begins with you — always. — Oprah Winfrey

It’s hard to argue with that, especially coming from someone who just invested $40 million and much of her time establishing the Oprah Winfrey Leadership Academy for Girls near Johannesburg in South Africa. I don’t care if you like her or not, agree with her politics or not, you have to respect all that she has been able to accomplish coming from a background that most “elitists” would consider filled with too many insurmountable obstacles.

Kudos to you, Oprah.

If she can do it, why can’t anyone?