I wrote a post last August that continues to get a lot of attention and reader feedback. It’s all about the phenomenon of people settling for unrewarding careers and jobs. I listed a bunch of reasons — I call them excuses — that people give for this interesting but overwhelmingly common condition. I proposed the idea that no one has to settle for an unrewarding, passionless work life.

Not surprisingly, I was accused of being unrealistic and — gasp — idealistic!

I normally loathe being called idealistic. Depending on the source, I consider it an insult, because normally when someone calls you “idealistic,” it’s his way of saying, “You have no clue. Your ideas are irrelevant, if not completely ridiculous.” However, being labeled idealistic puts me in pretty good company. What in the world is wrong with being idealistic? Jesus was probably the most idealistic person who ever lived. Martin Luther King, Jr. ranks up there pretty high, too. Same with Ghandi, Mother Teresa, Walt Disney, Bono, and pretty much anyone else who’s ever made a big difference in the world. Starting today, I’ve decided to take being called idealistic as a compliment. 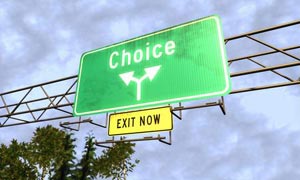 What I find most interesting is how desparate people are to convince me (and more importantly themselves) that when it comes to having a rewarding career, they are different. Try as they might and wish all they want, they don’t have any choice but to remain where they’re at.

Now don’t get me wrong, you may wish you could do something else, but upon considering the sacrifices and action steps required to make it happen, decide to stay right where you are. I’m fine with that; that’s your choice. But don’t even try to tell me you don’t have a choice.

I heard a speaker the other day quote someone famous. I don’t remember who said it, but the quote went something like this: “All successful people are Causationalists. They are the CAUSE of the positive results in their life. Unsuccessful people blame their lack of success as an EFFECT of the things other people do to them or don’t do for them.”

Successful people know that things happen in life that are out of our control. But they also know that when it comes to success, those outside influences only add up to less than 10% of the big picture. The vast majority of our roadblocks come from within. Your level of happiness and success lies squarely on your shoulders. If you’re not happily living a passionate, successful life, you’re the one to blame. I guess that’s why it’s easier to pretend you don’t have any options.

The reality is that you do have choices. But here’s the really REALLY important thing: the choices may not be easy, ideal, comfortable, safe, quick, cheap, simple, popular or fun.

Pretending you don’t have them is not realistic. It’s just wrong.

Looking for some insight on how to figure out what you’re supposed to do with your life? Check out the cover story in this free issue of Escape Adulthood magazine.