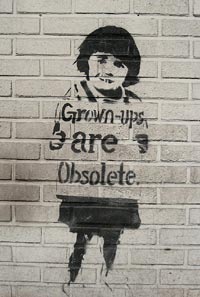 You might think my answer to that inquiry would obviously be a resounding yes. Chris Rako sent me this photo he took in London. I love it. And it caused me to seriously consider the question: are grown-ups obsolete?

I hesitate to say yes, for fear that it would discount the wisdom of our elders. Fresh off our trip to San Diego for the National Speaker’s Convention, I am struck by how as important as it is to have the energy and optimism of youth, the wisdom and experience of the veterans of life is just as important. Some of the best role models I see in the speaking profession — and in all walks of life — are the ones who actually had the opportunity to vote for or against Jimmy Carter. (and if you don’t know who he is, you’re obsolete.) They’ve been through many of the ups and downs of life; they are living road maps, alerting us to the potholes and steering us to the highways that lead to happiness.

So you can see my conundrum. Casting these people aside by labeling them as “obsolete” simply because of their age seems awfully rash. But then I thought of how my friend Michael Scott Karpovich defines a grown-up.

Now that makes a lot of sense. Kids are growing all the time, physically and intellectually. They can’t help it. Change is constant. There is always something new to learn and experience. But something happens to many people when they graduate from school (high school, college, grad school, you name it). It’s as if they see that piece of paper called a diploma as an official proclamation stating, “Congratulations! You did it! You’ve learned all there is to learn; you have all the knowledge you need to have to make a go of it! Your training is complete.”

Sounds a little silly, but it’s the truth, isn’t it? We as a species don’t particularly like change. While we’re in school, there’s not much we can do to avoid it. But once we’re out on our own, it’s easier to resist change. We settle into habits. We stop exploring. We stop asking questions. We don’t push ourselves. We’ve become grown-ups.

And we become obsolete.

The role models I spoke of earlier are not obsolete. Because they’re not really grown-ups. They continue to challenge themselves, to ask questions, to learn, and to grow. If you don’t want to become obsolete and left in the dust, that’s what you have to do, too. Because as fellow professional speaker Daniel Burrus says, “Everything that grows changes, and everything that changes grows.”

Unless you’re a grown-up.