Birds of a Feather

Jim Rohn once said, “You are the average of the five people you spend the most time with.” That’s an incredibly powerful truth. If you hang around with stumblebums and losers, you’re likely to become one yourself. Hang out with people who are where you want to be, and you’ll eventually get there. Birds of a feather flock together. The most powerful aspect of this old adage is the unsaid: you have the ability to CHOOSE who you spend time with.

Kim and I chose to spend last week in San Diego at the National Speaker’s Convention. All I can say is…wow. When you spend that much time around successful people who are making profound differences in many lives, people like Willie Jolley, Mark Sanborn, and Jack Canfield, you can’t help but have a little magic rub off on you.

I wish I could pass along all of the great information I learned from the speakers I heard and the people I met. While it would be awfully hard to do that, I can share some poignant quotes that really stood out to me…

“Turtles don’t advance unless they stick their necks out.” — Daniel Burrus

“Be an original voice, not an annoying echo.” — Simon T. Bailey

“Work harder on yourself than you do on your job.” — Chris Weidner 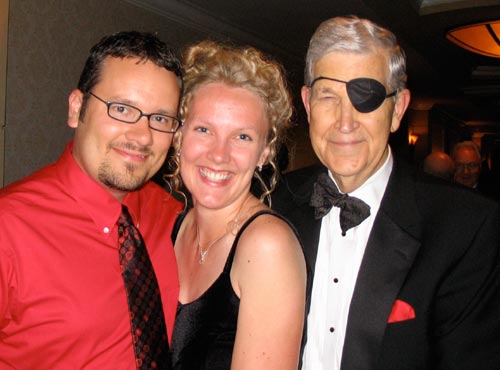 In a “full circle” moment, Kim and I had a chance to chat and get a picture with Charlie “Tremendous” Jones, a man I wrote about after last year’s convention. He is so positive, so cheerful, humble and uplifting. I like being around people like that, don’t you?

Then do it. Choose to spend time around people who lift you up, not the ones who drag you down.

One of the fruits that came out of last year’s convention in Orlando was the development of our mastermind group, also known as Naked Cheerios (an inside joke). It has been one of the best things to happen to “Kim & Jason” (the business) and Kim and Jason (the people) in a long time. Kim and I meet on a regular basis with Eliz, Jill, and Robert to discuss our businesses, share our successes, and offer advice. Not only has it helped our business tremendously, but we have all become great friends. It has been part of a larger strategy to spend more time around people we look up to.

So who do you spend the most time with? Whose house do you most often frequent? With whom do you chat on the phone most often? Who are you having coffee with this week? If you’re not thrilled with where your life is at, you’ll definitely want to do a little inner investigating.

But don’t forget to take a good look around you, too.