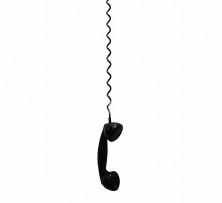 It’s been twelve days since the first cardboard box made its way through the door of our new office. The vast majority of the boxes are gone, but we still have no Internet. Or phones.

I’ll spare you the grisly play-by-play of the false promises, unmet expectations, and flat out ineptitude, but suffice it to say, I have not been this frustrated, angry, or exhausted in a long, long time. Maybe we’ll have everything up and running in the next day or two. Maybe.

The details to the story really don’t matter, because it’s a story you’ve no doubt lived, perhaps many times. Let me put it this way: it has been one of those experiences in which just about everything that can go wrong has. Sound familiar?

This experience has reminded of a few lessons. Two-and-a-half, to be exact. Maybe they’ll be of use to you the next time you run into one of life’s potholes.

1) Do What You Promise. I wish that all people, everywhere, would simply DO what they SAY they’ll do. That’s it. I know customer service advocates everywhere shout from the rooftops about underpromising and overdelivering. They say customer satisfaction is worthless, that customer loyalty is what you should be after. Great concepts, indeed. But my standards aren’t that high anymore. I don’t need a cherry on top. I just want you to live up to your end of the bargain. Do what you said you’d do.

If you are in any sort of business, if you provide nothing more than satisfactory service, you’ll actually do fine. Now here’s the cool part: if you make ANY sort of effort to go above and beyond, you will DOMINATE your market. We get great marks for customer service, but here’s the dirty little secret: it ain’t that hard.

2) Will it Matter Five Years From Now? When you have moments in which you get so frustrated and angry that it seems like the only thing your next action will lead to is a trip to jail, just stop. Take a break and step back for a second. Ask yourself, “Will this thing I’m upset about matter in five years? Will I even remember it five years from now?”

The reality is that it will probably be water under the bridge in a year or less. In my case, we’re talking about phone service and the Internet. As inconvenient as it is to run an Internet business with no Internet, this situation will most likely be cleared up in a matter of weeks, if not days. In the grand scheme of things, this is really no big deal.

2.5) Get Up Faster. Now that we have a little perspective, I have the choice about how to respond. Shall I continue wallowing in the mire letting these offenses against me ruin this joyful milestone, or should I dust myself off and keep my head up?

At last year’s National Speakers Association convention in Orlando, I heard a woman named Bonnie St. John give a speech. Bonnie is a downhill skier. Oh yeah, and she only has one leg.

She talked about competing in a Paralympic event. She made it to the medal round, but during a speedy run down the mountain, she slipped and fell. Emotions of all sorts swelled up within her. Frustrated, angry, and heartbroken, she sat in the snow knowing that she had cost herself the gold. Dejectedly, she got back up, and headed toward the finish line to complete the race.

But later she found out that the gold medal winner also had fallen during her run. The secret to her victory? She got up faster.

Life is hard sometimes. People can be jerks. That’s just how it goes. The worst things often happen when you’re right in the middle of striving for something great; they’re the things that test your mettle and see what you’re made of. You can’t always control the things that happen to you, but you can ALWAYS control how you react to them.

When life punches you in the gut, take a time out. Get some perspective. And practice getting up faster.

P.S. I crafted this post yesterday, and put the finishing touches on it today. The internet and phone actually got installed less than an hour before posting this. So this is the first entry to be posted from the new office. I guess I should have asked myself, “Is this going to matter five DAYS from now?”