On Pies and Pirate Hats

My dad turned 55 last Sunday. One of the cool things about my dad is that he has always kept his childlike spirit alive and well. Anyone who has spent any time reading his entries on the Escape Plan blog know that quite well. I didn’t notice it as much growing up as I do now, although moments of my mom rolling her eyes at his antics seem to go back as far as I remember. So maybe it’s not that I didn’t notice it back then as much as I didn’t appreciate it as much as I do now. 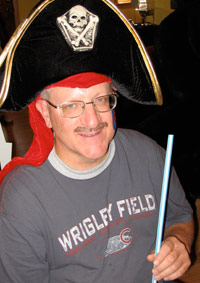 Maybe I have enough years on me now to know that not every dad is as willing to let that childlike side come out to play. He collects Snoopy memorabilia. He loves Homer Simpson. He’s building a model railroad layout in the basement. He won our fantasy football league last year and is the most valuable trash talker. And as the photo from our recent Adultitis Clinic attests, he still likes sugar and is not opposed to getting his face painted or wearing pirate hats. (Oh yeah, and the mustache is fake.)

A recent column in the Milwakee Journal Sentinel by Jim Stingl (thanks for the link, Marilyn!) highlighted an interesting pact made by two teenagers back in 1976.

At age 18, Dan Johnson and Malcolm McDowell Woods vowed that when they turned 50 — a laughably remote destination to anyone that young — they would have a pie fight.

They saw it as a way to ward off the excess maturity often linked to aging. If they engaged in something so childish and foolish at 50, they wouldn’t be old.

Thirty-two years have passed in a blur of jobs, mortgages, wives, kids and pets. So next weekend, Dan and Malcolm will fling pastry at each other and invite friends and family to join in.

The two men will be wearing tuxedos, and they’re urging their guests to dress formally to simulate the high-society pie fights that broke out when the Three Stooges were around.

Some people seem to think that the older you get, the more seriously you need to take life (and yourself). What a shame. In fact, as Kim and I travel the country on our speaking adventures, the people who seem to be happiest and most full of life are the ones who have learned that holding on to that magical, childlike sense of wonder and playfulness is among the most important lessons to be learned. They often wish they had figured it out sooner and applaud us for having it down so early in life.

I guess I had a pretty good example. I hope that 55 is my half-way point in life. And it’s my goal to make sure that no matter what, throwing pies and wearing pirate hats never gets old.