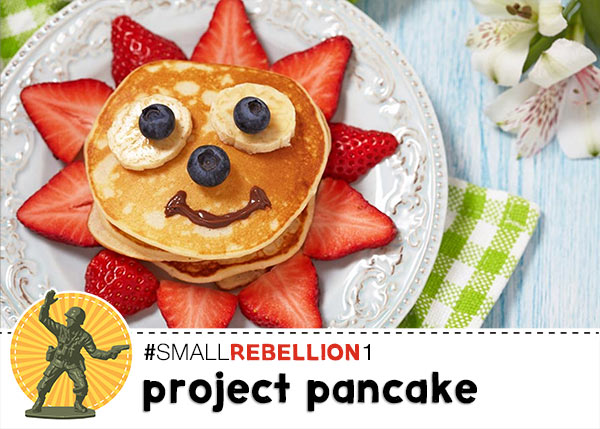 We’re doing something new and a little nuts.

We’ve been writing a lot lately about this idea of small rebellions, those small but mighty acts of defiance against the rules that don’t exist and the most effective way of defeating Adultitis. Over the past months, we’ve been sharing examples from people who’ve inspired us. And we’ve decided it’s time to take things to a new level. To get even more people involved and mount a campaign that really puts Adultitis on the defensive.

And so we’re thrilled to announce our first-ever officially-sanctioned Small Rebellion.

Here’s the plan: we’re going to throw out missions for anyone to participate in. Something fun, simple, and guaranteed to get Adultitis’ panties in a bunch. You can tackle the mission when it’s most convenient.

We hope that you’ll not only share your experiences and photos, but that you’ll also invite friends, family and coworkers to participate as well. We are giddy thinking about the inspiration that will come from seeing people from all over the world engaging in their own small rebellions.

It could be awesome. And really, really bad for Adultitis.

So how are we kicking things off? With pancakes, naturally. Ahem. You see, pancakes are a much-loved breakfast institution, but as such, are often subjected to standardization. They’re usually round, topped with butter and maple syrup, and served for breakfast.

The MISSION: In honor of National Pancake Week, we challenge you to do something FUN or UNCONVENTIONAL with pancakes. Mold them into interesting shapes. Smother them with an unusual topping. Have them for dinner. Use them to make a sandwich. Be creative. If you post them online, use the hashtag #smallrebellion1

Warning: Should you accept this challenge, other people may think you’re weird, and Adultitis will definitely not be too keen about you messing with routine. But don’t worry, that’s the point.

If you want to make sure you’re the first to know about each weekly small rebellion, be sure to sign up to become an Escape Adulthood Insider to receive our brief weekly dispatches.

Adultitis needs to know that there’s some new sheriffs in town.